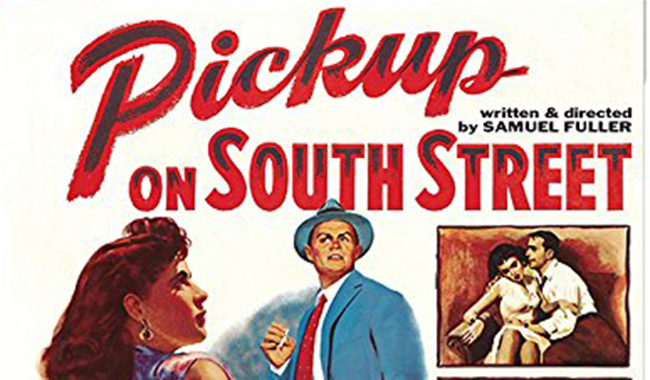 Pickup on South Street is the fourth film Sam Fuller released by Eureka! on their Masters of Cinema label, giving some kind of marker as to the degree the label regards Fuller. He was a director of many classic low budget and independent war films but also delved into many other genres including film noir. He considered his films between 1951 and about 1955 as the happiest and most artistically satisfactory films of his career. This was when he worked for Darryl F. Zanuck at 20th Century Fox, a producer who gave Fuller a great deal of freedom as a filmmaker. This film was the fist of 4 or 5 film noirs Fuller made and with each he departed from the clichés of film noir crime. Where he departed from the cliché in this film was bringing McCarthyist anxieties and the Cold War and the film noir crime film together. An influence on the film was also The Naked City (1947), an early example of a New York film almost exclusively shot on location on New York’s and narrated as a crime story. Fuller had ambitions to shoot his film on the streets of New York too but with only some partial success.

The film opens on the New York subway with crowded commuters in each other’s space (I wonder what that’s like!). We first glimpse Jean Peters, the ‘heroine’ of the story who is perspiring on the humid subway train. The train stops, the doors open and more commuters get on and alight including a pickpocket, played Richard Widmark. We see him at work as he picks Peters’ purse and the method by which he does it. But he escapes off the train before cops are able to grab him. They instead are following the girl, for she is the real reason that they are on the trail. When she gets to a Manhattan office block she realises that her purse has been lifted. It unravels through the police investigation that the pickpocket has stolen from the girl who was couriering for a communist organisation. What follows is both the police and FBI and the girl and finally the communists who are trying to recover microfilm from the stolen purse with Widmark in the middle.

It can be classified that all the characters are nourish: Widmark’s lowlife character Skip, Jean Peters’ girl, alluded to being a demi-monde prostitute given the lucky break by her sweaty ex-boyfriend, Joey the cowardly commie. Then there is the business-like FBI agent and the hardboiled and violent cop. One of the best character’s in the film is played by veteran actress Thelma Ritter who plays Mo, an old lady who “peddles information” on the underworld characters. She sells information to criminals and cops alike, living in a grimy basement apartment below a tattoo and sells ties on the side. She is a central figure and a link to both crime and the police. The film also uses a lot of street slang (“that muffin you grifted”) and strong focus on the technique of the pickpocket, known as canons.

Besides Fuller, the other star of the film that makes its stamp felt clearly is the cinematography of Joseph MacDonald using the typical trademark and chiaroscuro of film noir, including shadows and most notably the speed in which the camera comes up close on a face beaded with sweat to add tension. The film is rightly highly regarded by many critics but at the time was slammed by FBI director Edgar J. Hoover, let alone McCarthy for the anti-communist character played by Widmark (“are you waving the flag at me” he tells a cop). Typically the right and the likes of Hoover miss the point. Widmark’s Skip cares little for what is going on in the wider world and is just trying to survive on the tough streets of New York. He sees a quick buck in obtaining this microfilm, rather than having an ideological stance on communism. Film noirs sometimes provide a good insight to the street life of America during this period or at least our impression of it more than the glamour or apple pie America of many Hollywood films of the period.

The picture quality is clear and sharp drawing out the best of the cinematography without hardly a glitch or a mark on the film. Also on the disc there are the usual high quality extras one now expects of Eureka!: two of them are French documentaries (after all the French intelligentsia have always championed film noir), a piece by Francois Guerif, French film critic and historian and a 10 minute French documentary in which Sam Fuller excitedly talks about the opening establishing scene of the film. There is also a talk by Kent Jones. Hopefully the Eureka! Masters of Cinema series will extend their range of Fuller’s films.