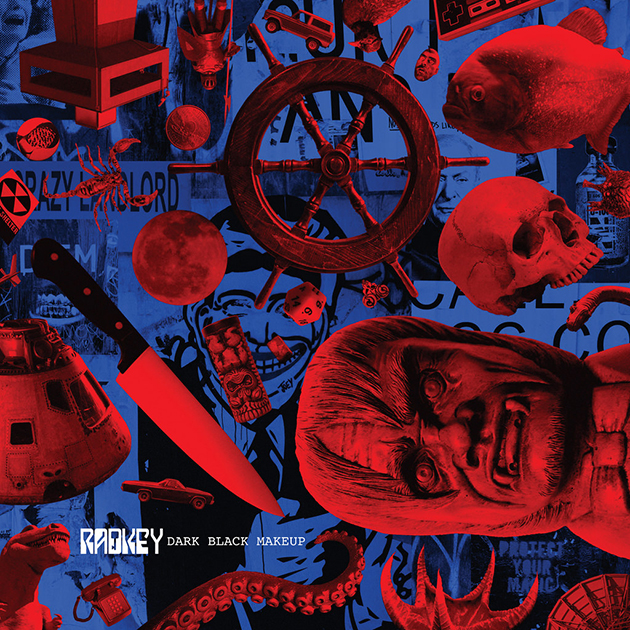 The title track from Dark Black Makeup is the best song Radkey have ever written – it’s a hit – that is now without doubt; a gritty, sultry punk rock anthem born of the dreams of tearaway teenagers raised on horror-punk and skate culture. The real question is whether the rest of the material on their debut album lives up to hype that’s been piled on this still-young group of musicians for the past few years, and indeed whether there’s any real substance to what otherwise will boil down to an entertaining if somewhat generic live experience.

Recorded at McCall Sound Studios in Sheffield with producer Ross Orton behind the desk, the band say it’s an album concerned with “jealousy, regret, love, obsession, death, insecurity, and sadistic, evil people – the kind of things that make you feel uneasy” – lofty ambitions that are to be applauded, but do they hit the mark? In all honesty, no, not quite.

Front man Dee Radke has a stunner of a voice; a deep and cavernous croon that does the Dark Lord Danzig himself no disservice, but Radkey lack any of the real effervescence and balls-out attitude that made The Misfits such a vital and ground-breaking band. They’ve so far avoided cliché by cleverly aligning themselves with the underground rather than shooting for the mainstream rock world, but laid bare on a debut album leaves them with few places to hide and the reality that their song-writing for the most part can’t quite justify the talk that’s being talked.

Songs like the title track go a long way to proving that the trio can pen hit singles. The snotty intro to ‘Le Song’ is a rousing highlight alongside the gutsy ‘Song of Solomon’ and the ripping ‘Glore’ is a two minute masterstroke of high velocity machine-gun skate punk, but this album is also crammed full of average listens. To give them their dues, there’s no doubting they can sure play the shit out of those instruments – drummer Solomon has a sledgehammer touch behind the bins and Dee rips out some disgustingly slick solos. Unfortunately the rest of the material soon falls foul of monotony and the album dissipates into what is ultimately a bland offering; thirteen tracks that can at times seem like a chore to wade through.

Radkey have a lot of potential but their mid-tempo take on punk rock with a severe lack of variation just doesn’t quite hit home – it feels flaccid and drained. Exactly who this band of brothers are trying to speak to with their music and exactly what they’re trying to say seems to remain a mystery for now, meaning that ultimately there’s more style than substance and the record as a whole fails to connect.