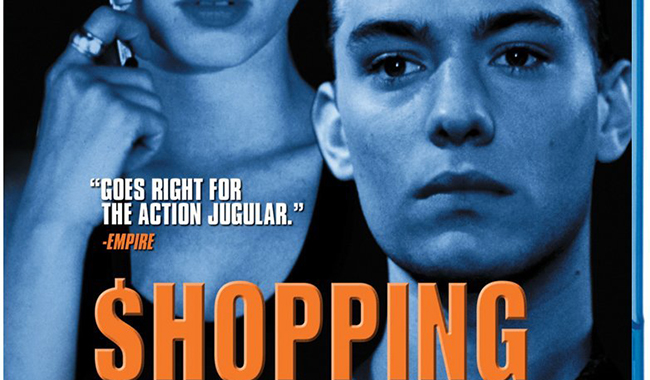 Set in the near future – Billy (Jude Law) is free from some recent government hospitality only to find his reckless habits get the better of him. Notably stealing cars and ramming them through shop windows.

Reteamed with his girlfriend (Sadie Frost) and with the force breathing down his neck, not to mention the other big names on the block (Notably Sean Pertwee as Billy’s main antagonist) Billy sets out on what seems like a lash-out at anyone campaign for disaster.

Jude Law in his first major role plays his part well enough, there is the cheeky side to Law that is evident in many of his more outlandish characters he has played since. Sadie Frost throws on a thick accent as his tempered girlfriend. Both sadly though seem to be rebelling for the hell of it and therefore you have little sympathy for either character – especially at the height of any night when all they want to do is ramp up the noise levels. This may be a true depiction of youth, but you may not want to spend time hanging out with it all the time. Billy’s story becomes more interesting as he is confronted by any shape of authority – friend, foe or police officer; you can see his instant rebellion kick in which ultimately will lead to his downfall.

As some of the opposition, Jonathan Pryce gives the film a level of class as the police officer forced to deal with the onslaught of street violence perpetrated against his officers. Sean Pertwee also impresses as the streetwise businessman who knocks up against Billy.

Director Paul Anderson’s love for science fiction is evident. His opening shots of northern industry (an obvious piece of cheap symbology for a film maker looking to present the future) is an easy nod to Ridley Scott’s masterful Blade Runner. And throughout the film Anderson returns to this with some very nicely put together shots of the streets themselves lit with smoke billowing out of vents. It’s an early look at what the film maker may have Achieved if he kept this aspirations humble and on the ground instead of pushing down full throttle for big budget special effects work.

This is perhaps in retrospect one of Anderson’s strongest films to date. The lack of a special effects budget has forced the director to rely on sets, locations and most importantly lighting his scenes practically – and here you can see in several scenes that he has no problem creating an atmosphere.

Shopping was a rare vision when it came out in the mid-90’s that perhaps lacked a bit of story. But now on retrospect it’s become an interesting micro-dystopic view at the future and at youth.