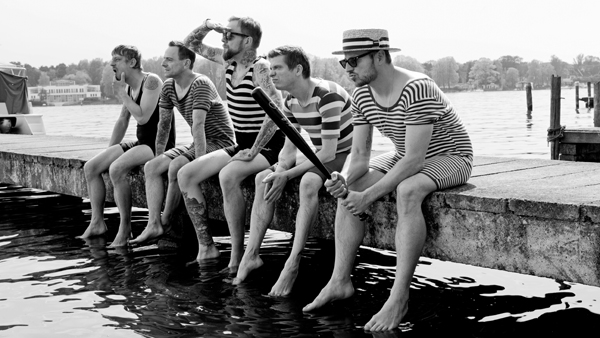 We caught up with Peter Baumann of German punks Beatsteaks at their show at Koko, London on 25th August to find out more about their new retrospective record ’23 Singles’ and just what it took to break out of their home country and build a lasting legacy.

Hi Peter, thanks for taking the time to talk to us today.

You’re welcome! I will try to answer your questions as good as possible, since there is not much to do at the moment because it is raining like hell.

Can you still remember the first show you ever got paid to play? What was it like in those early days for the band?

If I remember correctly, we played our first paid club show in a very small club in Berlin (Stadthaus Böcklerpark). There were not many people there but the people who were there had a great time and we really enjoyed it. In the first row of the crowd was one guy who asked us after the concert if we had a manager. Of course we didn’t and he offered to be our manager. His name was Eric and we asked him if he had any experience managing bands and he sad no, in fact he hasn’t managed anything yet. He just really liked our music and wanted to take care of us. Since we didn’t know anything either, we agreed and still to this day Eric is managing us. It was a really exiting time for us.

The show at Koko is a big one for you guys – in a climate where longevity can be difficult to achieve, how does it feel to still be filling venues of this size over 20 years since you started?

It is really a dream come true, because we didn’t reckon with anything and it seems we got everything you can dream of as a band. At least in my world. I am quite proud that the five of us stuck together over the years and didn’t break up over money or other insignificant things. We still like to make and play music in front of people and that is a real blessing after such a long time together. It’s kind of a good working, healthy marriage, which is rare to find.

Germany is a fantastic country for supporting punk and rock music and we often see international artists breaking there and doing very well, but a lot of German artists struggle to break out onto the national stage – why do you think that is?

I don’t really have an answer, maybe they are trying to hard?

What support could be provided to encourage that growth?

I do believe that you just have to do it the old school way and play your butt off wherever you can. I don’t really believe in external support to much. You have to get in contact with clubs and try to play concerts and give people a good time. They will remember you and your name will spread. I believe more in mouth-to-mouth propaganda – maybe a little Facebook too.

You’ve had exceptional success abroad, what do you think helped you to break out elsewhere? Is there anything in particular in the course of your career that you attribute your loyal fanbase to?

I can only guess, but from the beginning we had a very strong and loyal fanbase. They travelled to concerts outside of Germany and stayed loyal even if we where challenging them sometimes musically. They always understood our need to try new things and went with us. This is really rare and we are happy to have them. They grew over the years with us and we are thankful for that.

You’re releasing two new singles alongside 21 hits from your career next month – what are the major differences that strike you between the new tracks and your earlier material?

I think there is not a huge difference, other than sonic matters. We had those two songs in the bank and we were very keen to record them and put them on the album. We recorded them with a new producer named Sebastian “Zebo” Adams who we met on our last tour. He worked with the band “Bilderbuch” from Vienna and we liked very much his output. He is a very nice guy and we instantly clicked in the studio with him. It was very important for us to have new material on this single collection, because we wanted to point towards the future rather than the past.

What shapes your song writing and music these days?

Good question, I have no idea. I guess we are – like everybody else – on the hunt for the best song ever written, but that will never happen because of those damn Beatles. They did it already. No, seriously, there is no bigger concept. Everybody in the band contributes as much as he can and than we try to convince each other with good riffs, melodies and lines. When we listen to it and this feeling in the stomach comes, than we know we are on a good way to write another Beatsteaks song. There is no other criteria than that.

As more experienced veterans, how do you balance the life of a professional musician with a stable home life?

I find it very important to have both worlds. Without a “real” life, you have nothing to write songs about. To go on tour makes you appreciate what you have at home – while having the best job in the world!

Are there are small German bands we should be checking out and supporting here at Glasswerk?

I recently heard of a great live band. They are called Beatsteaks. They are gonna be huge!

23 Singles is out now on Epitaph Records.