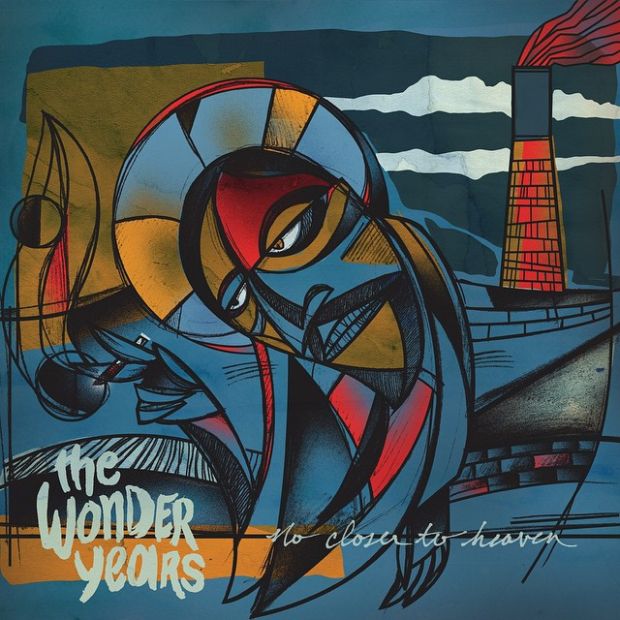 The Wonder Years – No Closer To Heaven

After The Wonder Years released 2013’s critically acclaimed ‘The Greatest Generation’, and paved the way for a new kind of pop-punk, it seemed unlikely that they’d be able to match its success. Fast-forward two years and a heart-wrenchingly great side project (Soupy Campbell’s Aaron West and the Roaring Twenties is well worth any fan’s attention), and the pop-punk heavyweights haven’t just followed ‘The Greatest Generation’ with their fifth full-length, they’ve topped it.

The record is a concept album, centred around the loss of a loved one, and the retrospective guilt that comes from ‘being too self-involved to see when someone you love needs your help’. “I think I’m growing into someone you could trust/I wanna shoulder the weight until my back breaks/I wanna run til my lungs give up” shouts vocalist Soupy Campbell on standout track ‘I Didn’t Like Who I Was Then’; the album is a multi-faceted love letter to a long-gone friend, and if there aren’t tears during the course of a listen, your heart’s made of stone.

‘I lit you a candle in every cathedral across Europe, and I hope you know you’re still my patron saint’ sings Soupy mournfully, on second single ‘Cigarettes & Saints’. It’s a showcase of the lengths of experimentation the Pennsylvanian six-piece have gone to on this record – the song builds up to a climactic reiteration of the lyric that crops up time and again: “We’re no saviours if we can’t save our brothers.”

This record explores heavier territory alongside a softer side to the band. ‘Stained Glass Ceilings’ features guest vocals from Jason Aalon Butler (of letlive. fame), who talked Soupy through the chronic writer’s block he suffered from whilst writing the record. Title track ‘No Closer To Heaven’ is a slower, softer sound and showcases a wearied note in Soupy’s vocals, leaving evocative echoes in the listeners’ ears as the record sounds out; clocking in at under two and a half minutes, the song is a perfect example of ‘less is more’.

Soupy Campbell referred to ‘The Greatest Generation’ as the third piece in a trilogy about growing up. ‘No Closer To Heaven’ is the by-product of the band’s maturity. Musically, lyrically and conceptually, this is The Wonder Years’ best record and a gut-wrench of a listen.