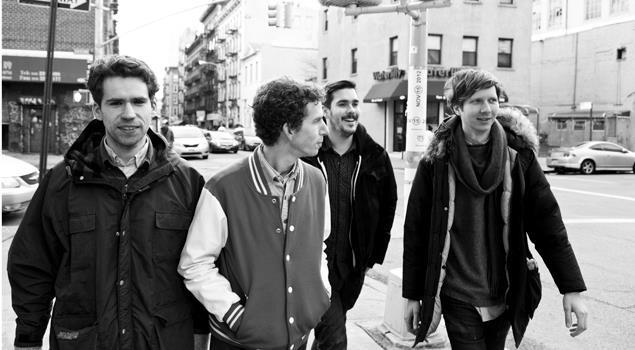 With three bands on the bill, all of varying levels of experience, it would be forgiveable for Saturday’s midnight gig to have a certain stiltedness; happily, the line up in Whelan’s Dublin had no such problems. The three bands were incredibly well-suited in that they all share a certain musical theme, similar enough to gel with one another but entirely different in approach and execution. Throughout the night most songs were not introduced individually but ran into one another, suitably reflecting the mesh-feel of the gig as a whole.

The gig opened at midnight to a reasonably busy room with Oh Boland, a three-piece group from Tuam in Co. Galway who excel in thrash and noise, but are just as at home providing soulful singing and memorable melodies, the latter being particularly noteable in the fantastic riff in “Where’s The Beach”. Having previously performed with The Sonics and The Growlers, Oh Boland showed definite prowess in getting the crowd going, not necessarily an easy task when you’re first on the bill. Front man Niall Murphy’s vocals are unlike any others, with a rawness that makes his singing less about the melody and more about the feeling behind it.

Murphy is completely at home with his guitar, it seeming more of a limb extension than an instrument in its own right. His shred-focussed solos brought the noise for which Oh Boland are renowned, balanced by a wide range of melody lines and some very catchy riffs. The band was without its usual drummer but their guest drummer Josh Noone, guitarist for Irish indie pop band Me And My Dog, was more than capable, providing a solid foundation to the band’s fast-paced set list.

Following Oh Boland’s impressive opening came Dublin-based band The #1s, the amusingly confident name of which is thoroughly well deserved: the band was exceptionally professional and played with the relaxed ease of musicians who know exactly what they do and exactly how to deliver it. They kept the ever-growing crowd pepped with their easy rapport, punk and power-pop sound and catchy choruses (see “Heartsmash”), and only further endeared themselves by getting the crowd to sing along with an impromptu chorus of “happy birthday” to their delighted drummer, complete with several birthday cupcakes being slung into the crowd from the stage. Mixing the jadedness of earlier pop-punk influences with the youth of the band members and their fans, The #1s created a crowd-wide sense of desperation and excitement, an intoxicating mix which left us pumped up for the final band on the bill, famed Brooklyn band Parquet Courts.

Parquet Courts were a ‘secret’ addition to the bill, appearing in all advertisement for the gig as the fairly disgusting anagram of Squatter Croup. Making a pit stop in Whelan’s while on a tour, it quickly became apparent that word of their arrival had leaked somewhat pre-event; the American band came to the stage to roars of approval from the now jam-packed room. Being crushed in a corner or awkwardly half-standing on a table just to get an available surface seemed not to dampen any spirits, though – the crowd hung on Parquet Courts’ every chord, seeming to move and almost breathe in unison, so as not to miss any of the onstage action. Slightly slower in parts than the previous two bands, Parquet Courts played an impressive array of indie and garage-based songs, peppered with laconic calls from the stage to the mad Irish crowd to “pay attention”.

Their instrumentation and vocals were consistently tight, with one particularly impressive solo seeing guitarist Austin Brown riffing behind his head. By the time they got to “Borrowed Time” it was a struggle to hear the band over our own roaring, which had increased tenfold when Brown started a bout of impromptu crowd surfing which did not end until at least ten bodies had gone sailing through the room, including other artists, random willing audience members and, most bizarrely, Mac DeMarco, who was in Ireland to play the festival Electric Picnic and is a friend and fan of Parquet Courts. He spent the gig nodding appreciatively at the side of the stage and wandering through Whelan’s making small talk, leaving a trail of destruction in his wake as people going past got the shock of their lives.

Whelan’s has long been a venue famed for its array of artists, including Townes Van Zandt and Jeff Buckley, and its most recent offering certainly shows signs of its continuing to showcase the very best of music: while we would expect excellence from the internationally established Parquet Courts, the performances by Oh Boland and The #1s were just as professional and just as captivating.