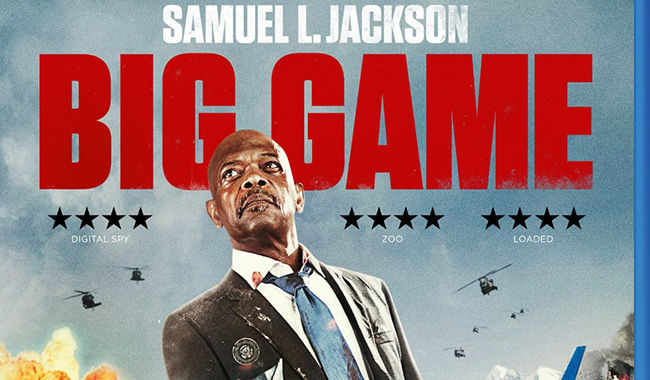 This little action film came out of nowhere earlier this film to decent reviews. Big Game sees Sam Jackson now getting his turn to play President of the United States (POTUS). Currently he’s on Air Force One flying over Europe when one of his Secret Service detail leaders (Ray Stevenson) decides to turn against his commander and sets him out the back of the plane in the escape hatch while the rest on board are doomed to crash in the Finnish wilderness.

Down below are a small group of psychotic terrorists waiting to hunt POTUS. But as is the case in every well laid evil plan, they didn’t count on!… in this case, a young 13 year old local boy (Onni Tommila) who has been thrust out into the wilderness for a day and a night by himself in order to prove himself a man.

Coming to the president’s aid with his know-all about the terrain and a bow and arrow set, the president forms a kind, if impatient, relationship with the boy as they run for their lives.

Big Game throws a lot of familiar tropes at you from many previous action films (Air Force One, Cliffhanger and so on). There is even time for name actors (Victor Garber, Jim Broadbent, and Ted Levine) back home tracking the safety of the President from a control room type scenari. Jackson doesn’t let the role of the “most powerful man in the world” go to his head. In fact more often than not he is more than happy to show off the weaker elements of the character. He doesn’t leap into action hero mode when trouble arises.

It is also a likeable relationship that he has with the kid in question, and it is a novelty that we aren’t stuck with some doe-eyed American know-it-all brat. So credit must go to young Tommila for playing his part well.

The odd thing about Big Game though is that before it has had a chance to settle into a rhythm of good guy vs. bad guys you are already at the climax of the film.  It’s to the film’s credit that it has a short running time, but you can’t help but think that they are missing a key action scene somewhere in the early last half hour of the film.