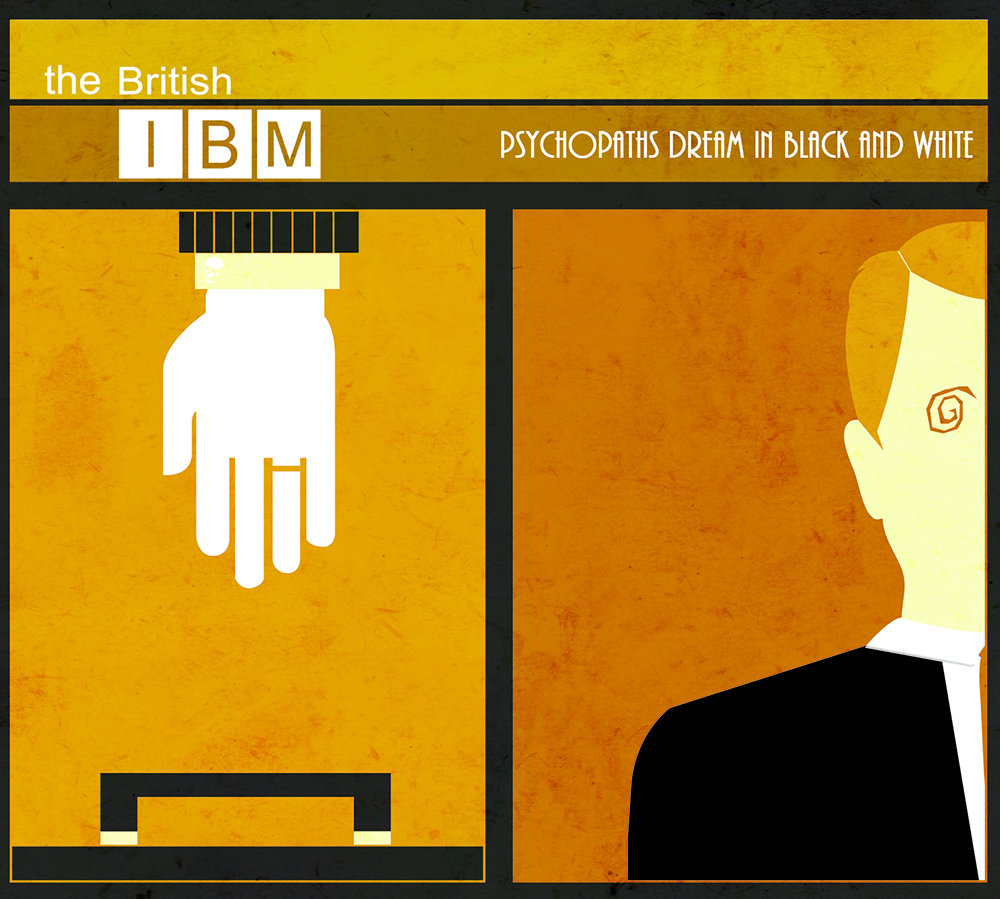 It’s said that one in eight people dream in black and white. Don’t worry if your last dream was in varying shades of grey – it’s also said that only 1% of the population are actually psychopaths (though check the Hare Psychopathy Checklist here if you’re concerned).

Now that the alarmist Jon Ronson reference has been cleared, Psychopaths Dream in Black and White is the second album for Cambridge based band The British IBM. Front man Arian Killen describes it as “an emotional album about emotional people” – if you’re full of them feels, this one’s for you.

The first two tracks are promising in their dark and sinister delight. The strange mood is set with an introductory crackle of sound waves. With psychopaths on one’s mind, opening track ‘All the Time’ conjures up images of Dexter with the lyrics: “I just want to be like you / slow, methodical, thinking everything through”. Following track ‘Hey Mikie’ has Killen singing the words: “Like a baseball bat that’s covered blood / from all the people I have clubbed / for telling me things I don’t need to know”. Brutally vivid, poetic, and calmly sung – one can’t help but grin. Cue: cackle and candlelight.

The rest of the album is steeped in uplifting string arrangements. Sometimes it works as the strings brings a slightly unconventional element to an indie-rock album. Other times, when combined with motivating lyrics, the final effect is more sappy than psycho. The added female vocals on ‘Tread Carefully’ makes it the most charmingly folk track on the album. The serene and calming vocals give the threatening lyrics an unnerving touch. “Tread carefully, because I’m capable, I’m more capable than you.” Mentally unstable or just sheer confidence?

‘Evolution’ is rousing, layered and almost mystic in its instrumentation. Sitars, percussion and bass sit alongside perfectly with placidly delivered yet passionate lyrics. Themes of frustration, social inequality and indifference are hinted towards, and the words are both intelligent and positively gloomy.

The stand out track of the album is ‘Silver Cigarette Case’. Here, The British IBM are at their most catchy, poetic and indie best. A deep organ sound brings a bout of fresh air compared to the strings found elsewhere. It’s anthemic and depressing all at once. The theme of apathy continues: “Something’s not right, because we don’t even care,” Killen sings at the ends of the song.

Final track ‘What More Can I Say’ is the ideal end. Killen’s voice is borderline raspy, like the alcoholic figure he sings about. “Oh you’ve been drinking again / Yeah, you decided its not your only friend”. The violin works well here to add a bittersweet, cinematic feel. Like the rest of the album, the lyrics and strings makes it a textbook audio track to be played during a sentimental part of a rom-com.

While the strong emotions are thickly painted in the first half of the album, they wilt a bit in the second as the ‘feel’s become a bit general. Would it be better the whole album was full of poetic and disturbing imagery? Yes. But then maybe I’m a bit of a psychopath.