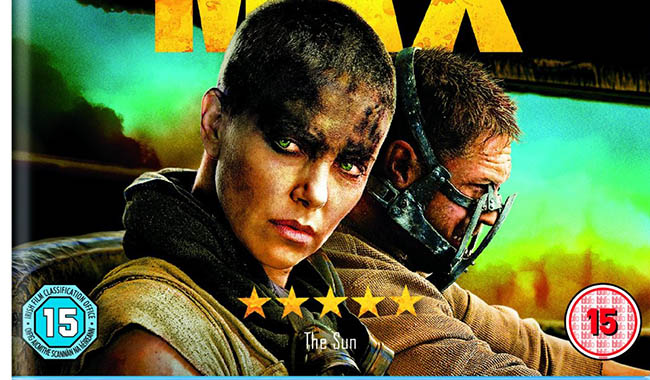 Tom hardy steps into the role of Max. Taken prisoner by a large cult group of War Boys lead by their tyrant leader Immortan Joe, Max finds himself branded, tattooed and used to fuel the sick with his own universal blood type.

Around this time though, one of Joe’s drivers named Furiosa (Charlize Theron) has taken one of his rigs, as well as his five young brides and made a bid to escape to a much better place. But it isn’t long before Joe and his entire army are on their tail, will Max in tow.

What transpires from here is one very long chase sequence where Max and Furiosa end up having to form an uneasy alliance as they are attacked by various factions of the wasteland around them. The dialogue drops to a minimum and the action takes centre stage for the majority of the running time. Each set piece different from the last and each making the most of as many practical stunt effects as they can.

George Miller has pulled of something quite magnificent here. He was tasked with bringing back a franchise that released its last incarnation 30 years ago. And Miller has been trying for many a year to get this fourth film made. The eventual shoot was troublesome to say the least and it wasn’t until the comic-con trailer hit before people really started to take this film seriously.

The worry then was that despite a fantastic looking trailer that the public had recently been burned by a slew of “beautiful£” trailers followed up by a film that couldn’t live up to it (See Prometheus). Fury Road met and then surpassed those expectations in both the public and the critical eye upon its release.

It isn’t easy for any film in any franchise to perhaps surpass the best of the series so far, to be perhaps the best film of the summer, and even the best film of the year. It also ranks as a choice for one of the best action films ever made. Time will of course answer all of this. But there is no doubting the impression that Fury Road has made – a non-stop showstopper of a movie loaded with detail that makes the world feel lived in.

The film delivers on the rewatch where you have time to take in much more of the character, costume, vehicle and prop detail.

The extras on the disc largely consist of various behind the scenes making of featurettes – and they do not disappoint. Focus on the look, stunts, costumes and vehicles are all covered as well as a look at some of the set pieces in the film.

A large portion of the interviews have been conducted after the release of the film and are fairly earnest and direct about the film.