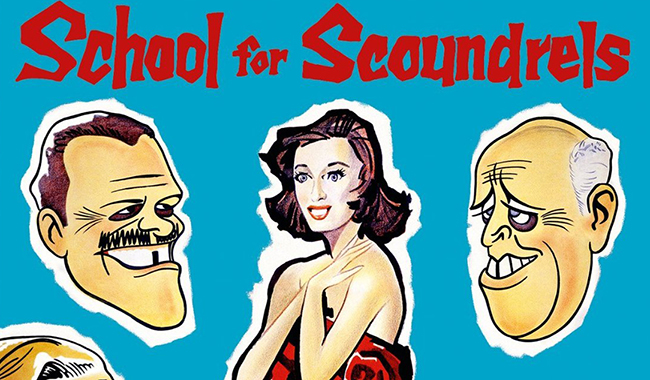 Forget the dreadful 2006 remake with Jon Heder and Billy Bob Thornton, the original film is a proper corker of a British comedy. It is very typical of the era when lead character Ian Carmichael seemed to have been in every comedy of this type; this film being the culmination of a whole series of films in which he played bumbling nice chaps from a good Middle-class background. Class is central to these comedies with Carmichael, most assuredly from a grammer school background but as a more aspiring middle-class. These started when he played the hapless soldier in Private’s Progress (1956), followed by equally hapless characters in Brothers-in-Law, Lucky Jim (both 1957), and most clearly in the two political comedies, Left, Right and Centre and I’m Alright Jack (both 1959). In many of these films he was also pitted against his main adversary as he is in this film, Terry-Thomas. In them all Carmichael plays a character who is often finding his way in the world and trying to overcome less scrupulous characters. The source of the plot of School for Scoundrels is a series of books by Stephen Potter called ‘Lifemanship’ and ‘One Upmanship’.

The film opens with Henry Palfrey (Carmichael) arriving at Yeovil station (in fact a station in North London) who follows the signs through the railroad sidings to a rundown manor. He spies on Dr. Potter (sharing the name of the original source inspirations author and played by the always wonderful Alastair Sim) on how to be one up on your opponents without really cheating or certainly not being caught. After the lecture, Palfrey introduces himself to Potter. He explain how his story goes back a few days but is really the story of his life. Palfrey is employed at Temple Bar where he is runs the family’s old business but is not respected by his employees and is bossed around by his chief clerk (Edward Chapman – better known as Mr Grimsdale in the Norman Wisdom films). On the way to work one day he literally bumps into a young woman on the bus (Janette Scott), asks her out on a date and nervously takes her out to a restaurant. Cue one of the funniest scenes in the film. Due to a mix up in the booking he is told by the head waiter (another of the great British character actors, ‘Dad’s Army’s’ own John le Mesurier) that there are no seats. Enter Terry-Thomas with an “I say” when he meets Palfrey’s “delightful little creature” on his arm. So sets in motion Raymond Delauney’s seduction of the girl away from Palfrey. This is most memorably played out in the dirty tactics of how Delauney wins the tennis match in front of the girl and drives her in his sports car. This takes Palfrey to Potter’s School for Scoundrels and so begins his education to playing Delauney at his own game and winning back the girl using a variety of dirty tactics, as well as being able to see back the dodgy sports car he was sold and expose the fraud of his chief clerk.

Released by Studiocanal in conjunction with another British classic starring Alastair Sim, The Happiest Days of Your Lives (1950), School for Scoundrels is something a little more subversive and indeed sexy than many comedies of the period. This was prior to the sexual revolution, prior to the lifting of the ban on D.H. Lawrence’s ‘Lady Chatterley’s Lover’, but never the less anticipates this, even if the ‘girl’ is still a fairly dull but pretty rather than any independent spirit. By the early 60s Carmichael’s characters had become as old fashioned as National Service, while Terry-Thomas became the stock cad in a many film throughout the 1960s. Filmed in many still familiar locations in suburban North London, especially Hendon this is a typically genial comedy and an enjoyable one and stands the test of time very well unlike the dreadful and pointless remake. Extras include an interview with author Pottter’s son, one on Terry-Thomas by his biographer, Graham McCann and an interview with Guardian film critics, Peter Bradshaw.