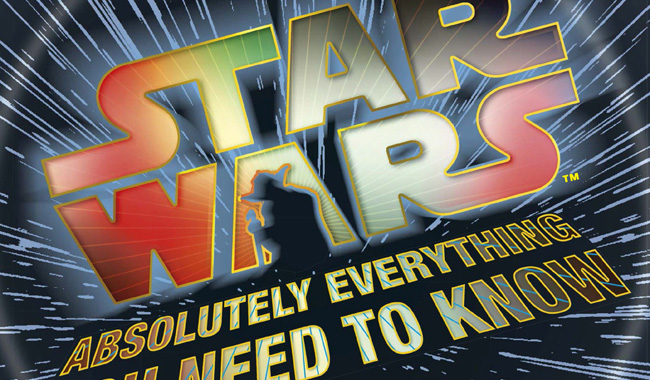 Star Wars: Absolutely Everything You Needed To Know Review

The front cover of this hardback invites you to journey to The Force Awakens, the hotly anticipated Star Wars sequel. And yet, while aimed at kids to let them know absolutely everything, it does serve a purpose for a wider audience – in describing everything which is canon.

Over the years, there have been a multitude of Star Wars books, games, comic, tv shows and cartoons. After being acquired by Disney, some of these have been left to the wayside, some have maintained a part of the overall structure, while more literature have been added, and there’s more coming up. So it’s good to have an idea of what is worth being aware of.

And this book has it all. From the protectors to the bad guys, the aliens and the planets that house them. Everything that has been and what is to come, Absolutely Everything covers just that.

But at no point does it feel like you’re reading an encyclopaedia. Filled with photos and art, facts and “did you know’s?”, there’s enough spice and flavour here to keep everyone interested, especially the target audience.

From the famous Millennium Falcon to the Mos Eisley Cantina, The Fett family business to the Clone Wars saga currently on tv, DK don’t leave a stone unturned as they delve into the past and future of George Lucas’ brain child.

Whether you have a little one you want to introduce to the galaxy far, far away or rekindle your own interest and maybe learn some stuff you weren’t already aware of ahead of the this December, Star Wars: Absolutely Everything You Need To Know is one book you can judge by it’s cover.