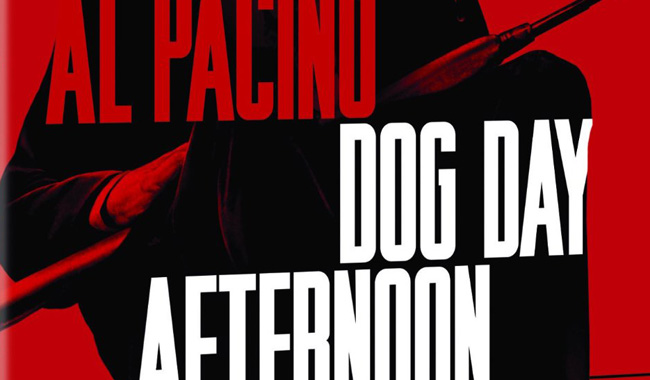 eleased by Warner Home Video as a 40th anniversary edition, Dog Day Afternoon looks fresh and vibrant on the new Blu-ray transfer as it shows up in a ray of sunshine the trash ridden streets of 1970s New York. The opening montage is played to Elton John’s ‘Amoreena’ from his underrated 1970 album ‘Tumbleweed Connection’. Other than this song over the opening credits, a wonderful montage of shots of everyday New York there is no other incidental music or songs played in the film. As the first frame in Dog Day Afternoon tells us this is based off a true story of what occurred on 22nd August 1972 and changed the way police tended to civil disobedience. It wastes no time in getting underway. After the opening montage, three men get out of a car on a warm summer’s morning (although it was filmed during a sunny winter) as the bank is opening and enter. One is a curly haired youngster – who quicly bottles it and runs off, another a man with a long parcel (Al Pacino) and finally a nervy individual (John Cazale, who was always great as these type of intense characters and also familiar acting with Pacino as adopted brother Freddy in The Godfather films) who takes a seat to speak with the bank manager. The man with the bank manager gets out a machine-gun and holds it up against him while he is in the phone. The man with the parcel frenetically opens his parcel concealing an old World War II style M3 rifle and yells to all the staff (no other customers have come in yet) that this was a stick-up. As is usual with heist films the thieves have to aggressively assert their position and corale the staff together and ensure they do not raise the alarm. Initially facing some resistance they appear to have the situation under control. Pacino is clearly the leader and gets the manager to open the safe. Spotting that the manager may be putting in the wrong key that will trigger the alarm he warns him that he “doesn’t wanna start throwing bodies into the street”. Are they professionals or amateurs? The first error by the gang occurs when Pacino burns the ledger. The smoke from the waist paper basket alerts the attention of an insurance company across the road. The manager naturally is forced to shout across that everything is okay. However, when the gang have the bank’s money they are about to leave only to find that the area is surrounded by cops. So now begins the hold-up.

But this isn’t a simple cops and robbers, good guys against bad guys story. It soon becomes clear that the police are not popular with the locals. Pacino’s Sonny tells the cops his demands that he wants a plane out of the US to Algeria; the viewer already thinks this a pipe dream and it’s not going to turn out too well for them. Due to the police heavy handedness and the sympathy the thieves have with their captives the crowd outside are showing their solidarity with the ‘villains’; even the captives refuse to get handed over to the police after they see how their asthmatic security guard colleague is dealt with by the cops after he has been released by the gang. Naturally the stand-off becomes a media circus as news teams analyse the lives of the gang and in particular Sonny. It gives the reasoning behind his justification for needing cash, namely that Sonny is married to transgender Leon (Chris Sarandon) for his gender reassignment giving an even greater political aspect to the film.

As already mentioned Dog Day Afternoon is based off a real story with Sonny being the real-life John Wojtowicz and Sal (Cazale) changed from an 18-year-old to an older man. By all accounts the film is for the most part fairly accurate and keeps up the pace, drama and action from beginning to end without a lull. Director Sidney Lumet worked closely on this film with Pacino and against his normal working methods the script was mostly ad-libbed and led particularly dynamically by Pacino. Pacino went through many efforts to make the part work including not sleeping for days on end to look genuinely fatigued and even ad-libbing the famous scene rousing the crowd to shout out Attica (the infamous State Correctional Facility). It has rightly retained its cult classic status where it should remain. It is a film of its time and is not a slick heist film of the likes of Heist (1995) (which also starred Pacino) or the Ocean’s 11 films bust instead has a political angle and a sense of gritty realism to it. The image is sharp in this 40th anniversary edition giving the film a new freshness. The main extra is a fascinating 18 minute making of documentary.