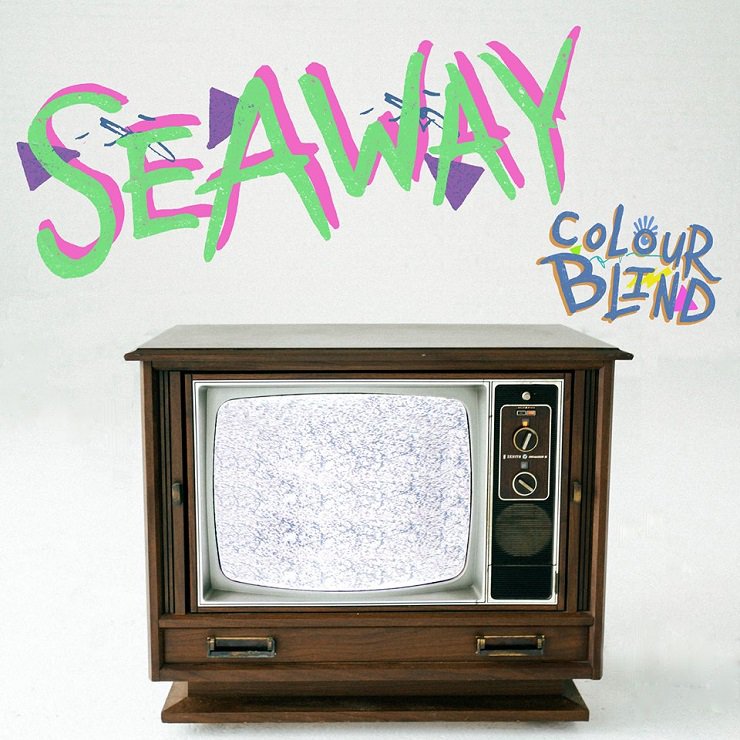 Ontario, Canada pop punk band of five Seaway‘s new album Colour Blind is possibly the most nostalgic on the market today. The album marks the group’s deubt with Pure Noise Records and has an unmistakably old-school feel – its style, shouted vocals and major third harmonies on choruses reminding the listener of the likes of Sum 41 and Weezer in their heydays. Everything about Colour Blind screams early 2000s, even down to the font used on the album artwork. Be prepared to feel like you’re about thirteen and watching a band play at a stereotypical pool party while fellow teens shove well-meaning cops into swimming pools in slow motion.

The album is youthful sounding and incredibly feel good. It’s apt that it saw its release last Friday; if ever there was an album to get you ready for the weekend, this is it. Even tracks which are melancholy in parts (Trick, Stubborn Love) are always pervasively positive, probably thanks to the fast tempos, frenzied strumming and rhythms and classic cheerful melodies and chords. Every song is a pleasingly literal snapshot into a particular situation, almost a story within a song, in a very noughties fashion. The album is the ultimate in anti-authoritarianism and relinquishing responsibility; the biggest problems the songs have are girls messing around and wondering angstily why they get hassled for not fitting in. The last song on the album, Goon, is the culmination of this mindset: its despair over being a reject and not good enough is the epitome of stereotyped teenage angst. In this album there is no 9-5, there are no bills to pay; we are only exposed to teenage concerns, which arguably are maybe the most important (or maybe I’m reading too much into this).

Stand out tracks include ‘Freak’, which is irritatingly catchy and blissful in its proud display of being “different”. ‘Stubborn Love’ also makes itself known: it’s one of the notably sadder tracks on the album, but no less enjoyable for that, and the rawness of the vocals on the refrain “this is stubborn love” is oddly chilling. ‘Growing Stale’ is another track which is especially pleasing and fantastically anti-elitist (“keep your silver spoon”).

For all its time capsule to the noughties qualities, there’s still something undeniably current about Colour Blind: there’s a raw quality to its vocals which grounds it in reality, compounded by its grungy and gritty instrumentals. There’s something impressive about being able to create a sound which is simultaneously nostalgic and contemporary, a quality Seaway have achieved admirably well with this album. It seems to be the perfect album for anyone in their 20s looking for forty minutes or so of escapism in the form of their teenage years.