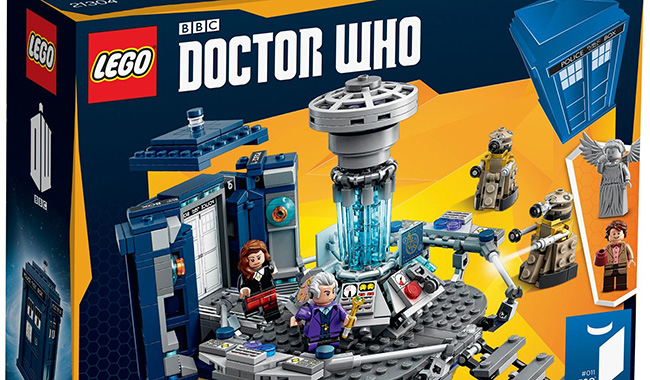 The Lego Ideas line (previously Lego Cuusoo) is the theme circulated around fan created sets/concepts. The sets require 10,000 fan votes to be eligible for Lego review of which the best get selected for development and ultimately release by Lego as new sets. As fan creations go, it’s no surprise that a lot of the sets have revolved around film and TV. Previously released Ideas sets have included Back to the Future, Ghost Busters, The Big Bang Theory and WALL-E. The latest release in the series is based on the hit BBC TV show Doctor Who based on the design by Andrew Clark.

The Doctor Who series is certainly popular enough to ensure that like in 2012 when the Lego Cuusoo Minecraft set: Micro World (21102) was released, it will become an absolute must have Christmas toy, and with a December launch, it is worth putting those orders in as soon as possible if you want to ensure one under your tree this Christmas.

The four minifigures included in the set are very nicely detailed as usual and have a very good likeness to the characters in the show. It is interesting, though perhaps not surprising that Lego decided to include two Doctors in the set. The original design up for review had what I think was the Tenth Doctor  played by David Tennant, but the retail set decided to go with the most recent Doctors in the Eleventh played by Matt Smith and the current Twelfth Doctor played by Peter Capaldi.

Matt Smith Doctor is depicted in his usual attire of bow tie and a tweed jacket. The detail on the figure is amazing down to the buttons on his shirts and stripes on his jacket. You also get two different facial expressions the smiley version and a more serious version.

Peter Capaldi’s Doctor on the other hand is not in his usual attire of a dark blue or black coat with red lining. Instead we get the Doctor as he appears in the 2013 Christmas special where he wore a purple coat after regenerating from the Eleventh to the Twelfth Doctor. Luckily if you are after the usual look, this will appear in the Lego Dimensions Doctor Who pack due out in early November. Peter Capaldi does not get a second face presumably in line with the fact that he doesn’t tend to smile a lot in the show. The face we do get is very well captured and, I think, is one of the best likenesses in Lego to the actual actor there are.

Clara Oswald is dressed in a tartan skirt with a blouse and black cardigan which seems perfectly reasonable for a character that doesn’t have a usual look. Again the detail on the figure is very nicely done, although the two faces available are not that different.

Finally we have the Weeping angel s which are probably the scariest monsters in the Doctor Who universe. Effectively the figure takes a the usual look of a Victorian graveyard angel statue, built out of a slope for the dress and the torso with angel wings attached to the back, all in gray with some darker gray details. The best part of the figure are the two faces, with a serene normal angel look and the opposite being quite possibly the scariest Lego face I have seen.

The build comes in three separate parts, but it must be noted that there are no numbers on the bags of Lego. This means the build really becomes an old school challenge of finding the right piece from the 600+ pieces that you have to trawl through. Personally, I like this kind of build, though this is probably the largest set that I would want to do it. To make things even more complicated, a vast majority of the piece count are pretty small pieces, so there’s a lot of very detailed work to be done as well as risk of losing pieces of course if you are not set up correctly for the task.

But what results this detail creates! The first section is the interior of the tardis. The interior really covers the middle raised platform of the console room. The middle console and the blue lit ‘time rotor’ rising up to the ceiling have been faithfully designed and really look the part. There is a lot of detail on these controls with different designs on every panel. The raised section is also surrounded with a guard railing with further controls on each side very much like in the show.

At one end of the platform we get stairs going down to the floor level and on the other side we have a well designed door section where the exterior of the tardis can be attached.

The second part of the build are the two Daleks. The Dalek design has gone through a few iterations and I think overall this is the best one. The original design got the head disks very accurate, but due to the design the head stalk was on top of the head. The body was also designed very thin whereas on this set the body design is spot on I think. Lego Infinity comes with its own version of the Dalek in the Doctor Who Fun pack, but this is clearly a low piece count version that looks the worst of all. The Daleks definitely are a fun build that also look good. With such a simple design apart from the printed head disk, it will be very simple to build your own multi-coloured Dalek army to go with them!

The final part is the exterior of the Tardis. The external shape of course is the old blue police box. The design from the outside for this is nice and clean with enough detail where it is needed. All the text comes in printed bricks as well, so there are no stickers to be added anywhere in the set.

As mentioned above, the box can also be opened, which requires lifting off the roof and twisting up two edges which then allows for the set to be attached to the interior part for play. The design for this is again very well thought out and there are no obvious indications of this visible from the outside. Obviously the box is slightly oversized compared to the minifigures, but it will also make a very nice display piece on its own.

The Doctor Who set is definitely one of the best smaller Lego sets released this year. The intricacy and detail of the set is superb, but this does come at a cost of making the build harder than a normal set of this size. The build takes significantly longer because of this, and therefore I would certainly put aside plenty of time on Christmas day for completing it.

Obviously the target audience for this set is any fan of Doctor Who, but this one is definitely also worthwhile for other fans of Lego. The designs all around are very well thought of and offer an interesting, long and enjoyable build. Long time fans will also be pleased that there are no stickers anywhere in sight and nor have Lego been inclined to add any spring loaded missiles etc. anywhere to distort the look.

It is also nice that with the release of the Lego Dimensions game, we will be able to get further figures to go in our Doctor Who collections, including a Cyber Man figure and a brick built K-9 which were both included in the original fan design to go with the set. It remains to be seen whether Lego might be interested in further sets for Doctor Who, should its popularity be anywhere near what happened with the original Minecraft set.

So once again, the release date is 1st December. Get to the Lego store nice and early as these are bound to fly off the shelves. It’s definitely worth it!