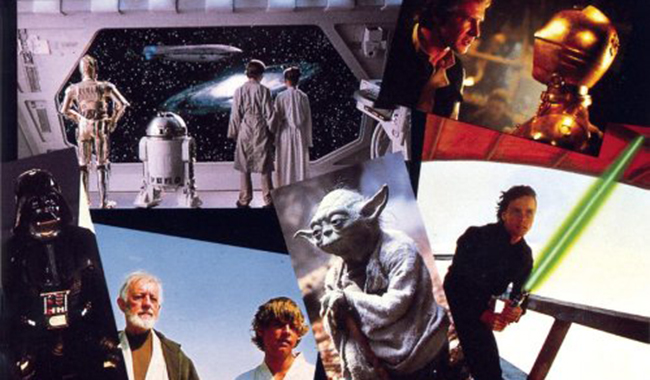 Sony Classical originally released this album in 1990, and now twenty-five years later, it has crash landed again in the outer rim, and Filmwerk are here to review it, perhaps for a whole new generation of listeners.

Firstly, a small clarification: Strictly speaking, the album’s subtitle [The Star Wars Trilogy], is an ever so slightly misleading one, as what we actually have is a sort of curated ‘highlights’ collection of themes cut and rearranged from the full film scores of Star Wars, The Empire Strikes Back, and Return Of The Jedi. This is obvious of course when one considers the single disc nature of this release, and the associated time limitation that this dictates.

But all is not quite as it seems, and more to say, we have…gracious me, was that Yoda phrasing?!

Do we have a bad feeling about it? No.

So, for those that need a little background information on the disc, here is the skinny…and remember that many Bothans died to bring it to you.

Many readers may know that the original soundtrack recordings for all three original Star Wars movies were performed by the London Symphony Orchestra, and mostly recorded at Abbey Road studios in London.

Wonderful credentials indeed. However, that didn’t stop dear old George Lucas from dreaming of one day creating his very own sound studio ‘Skywalker Sound’, and in addition to that; putting together his personal dream team orchestra….and that would be (no surprises here), The Skywalker Symphony Orchestra.

Why are we bothering to mention all of these many Skywalking shenanigans? Well, it’s very simple; this recording we have right here for review was one of the first orchestral products of George’s newfound stateside symphonic autonomy.

On paper that looks like a lot of marvellous stuff.

Let’s see if it’s all Bantha fodder or not.

To this author’s admittedly ‘non engineer’ ears; the mastering of this recording is quite pleasing, and plays well to a modern sensibility. It doesn’t suffer too badly from the traditional Classical music bugbear of such gigantic dynamic range as to make typical modern listening a bit of a chore.

Don’t get me wrong, I love listening to great music with fantastic dynamic range in the right environment. The trouble is the right environment i.e.  a nice quiet brooding chamber with good acoustics, or a nice quiet room and a great pair of headphones etc. is all too often a rare commodity these days. People consume their music on the move, and this tends to involve distraction and background noise. Add to this, the flattening out that a typical mp3 conversion from CD (even at 320bit), does to the music we listen to, and you can understand why orchestral or symphonic music can be a very unsatisfactory experience. You have to continually hit the volume up in the quiet bits, only to blast your eardrums to pieces when someone hits a Kessel (sic) drum or timpani. Certainly, riding the Vader (so to speak) is part and parcel to listening to dynamically wide ranged music in typical modern environments.

Testing this CD in the car at motorway speeds and in a busy office suggests a mastering sensibility reasonably adept at keeping things listenable without completely destroying the nuance of Williams’ compositions. So we can certainly give it a thumbs up on that battlefront.

John Williams work from this era has nothing to prove, and of course it goes without saying that the music on this CD is wonderful; the only caveat to that being the extremely strange version of the Cantina Band music, which features all manner of terribly dated electronic blips and laser zaps as well as some horrid beat sequencing; none of which is consistent with the actual piece as heard in the movie. It’s badly misjudged in and of itself, and made all the more of a carbuncle sandwiched as it is; between the achingly beautiful ‘Luke & Leia’ and exciting ‘Here They Come’ (the cue that underscores the century ships battle after escaping the Death Star in Star Wars). Its placement here is simply ruinous to an otherwise pleasing continuum.

That aside, the only other problem is one that would only affect the kind of Williams fan demographic that probably wouldn’t naturally gravitate towards this collection in the first space. However, it’s worth a mention.

Basically, the album (as already mentioned), seems designed to play like an abridged but cohesive ‘Highlights’ collection. Comments on the Cantina Band aside, it does this very well. However, it does four things that could potentially lead you down the dark path:

Firstly, it omits certain themes that one would expect to hear (the biggest one being Luke’s Theme from Star Wars), which admittedly is semi-present in refrain form during some of the other longer ‘medley’ style tracks, but is still a burn to not have properly included (why not drop the bloody Cantina Band to make room?).

Secondly, it chops the film chronology around so that themes from the three movies are not linear. Not a terrible thing per se, and no doubt done in an attempt to construct a best possible flow listening experience. However, how successful this is, is debatable, and rather blasted into irrelevant disintegration by that Cantina Band shaped Mynock chewing on your ears.

Thirdly, given the aforementioned missing themes; it Rancors (sic) a little to have a fair bit of repetition in how the opening and closing themes play out their refrains.

Lastly, one or two of the larger themes bookending the CD are extended rearrangements that do not occur naturally in the movies or indeed the full scores. This means that you could feel a disturbance with some of the edits or rearranged progression of cues. Movie scores tend to create the appropriate visuals in the mind, as the music is inextricably linked to them for most people. Thus, from a certain point of view, any significant deviation from the sequence of cues you expect; can be hard to embrace.

It is worth noting of course that none of the points made above are the slightest bit relevant to the demographic this collection seems to be aimed at. This is a good thing, and should absolutely be taken with a pinch of Sarlac (sic).

In conclusion, a recommendation can certainly be made for this CD, it does a cracking job of hitting most of the highlights from all three scores, and presenting them in a way that (Cantina Band aside), flows from the force well enough, and seems to possess a beginning, middle and end.

It may well act as an appetite whetting route in to buying the full scores for some listeners too, which can only be a good thing.

Before signing off, it has come to our attention that a whole bunch of Star Wars themed puns have crept in to this review. It is unknown quite why this has happened, and we apologise prodigiously.

Let us just put it down to general Episode VII over excitement on the part of the author, and…move along.