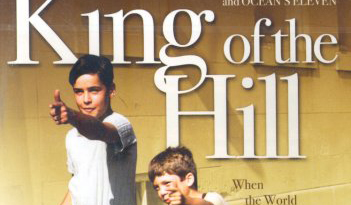 King Of The Hill Review

This early Steven Soderbergh flick gets a re-release on DVD. Largely overlooked upon its release, King Of The Hill is set in the depression era in America where we follow a young 12 year old boy and the struggle he is forced to face against poverty that tears his family apart before his very eyes. First his younger brother is sent away to live elsewhere, His mother is committed, and then his father hits the road as a salesman leaving him pretty much to fend for himself, attend school and seek solace or hide from various individuals he meets in his daily routine in order to survive.

Soderbergh mounts an increasing sweaty tension in the face of his young lead actor here. All too often perhaps relying on sustained close-ups of the boys face as his face contorts in response to what life is doing to him. But the film is acts as a window to a time that perhaps made people response and pull faces much bigger than this child actor can muster.

Every character counts, every moment counts. The looks from every adult be they teacher, parent, policeman or bell-hop: Every detail matters. The tale itself and the reality of the situation as explored here is far from a merry one, but it’s one that is more important than it is entertaining (That’s not to say that it is ever a bore). With this many characters each representing the time with slightly different shading each makes this one of Soderbergh’s early masterpieces.