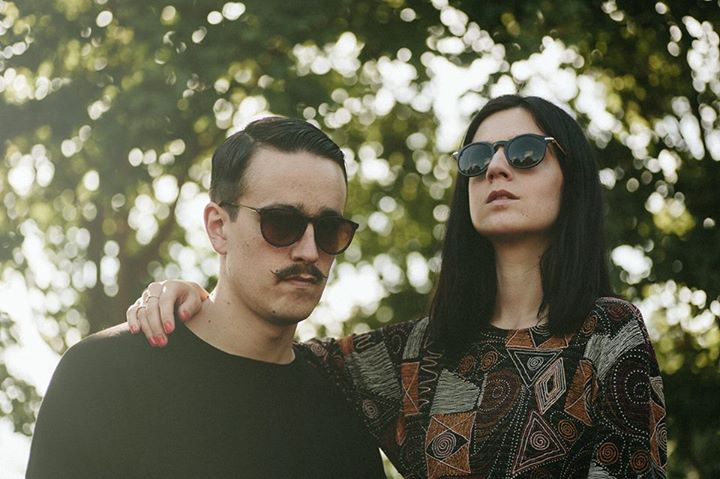 We’re pleased to be bringing you this interview with European pop duo Sea + Air in conversation with their producer Tim Bruzon, discussing their new record Evropi which is out now on Glitterhouse Records.

Tim: We met in Stuttgart somewhat randomly. I thought Daniel was trying to steal my girlfriend’s suitcase, but then, realising he was unlikely to be a bag thief (his moustache made him too conspicuous) we got talking.

Daniel: I actually stole your wallet. You didn’t recognize until today I think. Either because you are a mushissian who never expects to have money or because wallet is American English, how the fuck should I know what’ s going on in your mind?

What studio did you use and why?

D: We started in Canada, at Bottega studios. We chose it since it’ s located on an Alpaca farm and Alpacas are therapy animals. Perfect for the emotional process of recording a Korn rip-off album. Then we went on to Berlin, where we recorded in an old GDR building that holds several hundred recordings studios. And we finished it at home in Southern Germany and Greece.

T: The mix was done at my place in Bristol. It’s a home studio, lo-if but I know the room and was very happy mixing the record there.

Did recording the album in the UK reflect your wish to develop an artistic presence here in the UK?

D: Of course we always thought the English would a) understand our musical approach and b) need a band from pop’s third world countries Greece and Germany to kick their asses cause British music has become a little bit boring in the last decade, hasn’ t it?

Were you fans of each others work before you recorded together?

T: After our first meeting Daniel gave me My Heart’s Sick Chord. I thought there were great moments in it and I immediately had this feeling that I could contribute something to their sound. It’s funny because at that time there were no clues that we might end up working together.

D: Yeah actually listening to Wave Machines destroyed my above-mentioned opinion. I had been very disillusioned about UK pop since I had been a huge fan of tEnglish pop, 60’s through 90’s. 00’s sucked, except for Wave Machines (and Queen with their 34th new singer!)

Was it a particular challenge to work with the traditional/acoustic instruments alongside the electronics and production techniques?

T: It’s something I have been doing for a long time so was familiar territory. The Bazouki was new to me though. That took a little while to get familiar with.

D: We never had to be concerned since Tim captured it all perfectly.

What were the main references/inspirations for the sounds on the record? Were there any british bands in particular around that time that made you want to record here?

D: Well the musical inspirations mainly came from continental European music. Manos Chatzidakis (Greece), Arvo Pärt (Estonia), Popol Vuh (Germany), Trio Bulgarka (Bulgaria) etc. We just had to make sure we don’t lose connection to the Western civilization completely. Tim was perfect for that. But in general I think the UK needs us more than we need the UK. Are you telling your readers that I am making haha-sounds saying cocky things like that? Have you heard the band Liars? Some of the vocal processing and atmospheric effects stuff reminded me of their Drum’s Not Dead album, have you heard it ?

T: I haven’t, am going to listen though.

D: Eleni and me saw Liars 10 years ago. Great live band. The Drum’s Not Dead album was recorded in that same studio in Berlin. But we’ve never heard it. Anyways we knew it’ s so great that we didn’t even need to hear it. We told Tim to make our album sound like an album all of us have never heard before (Liars for example). Makes sense in a way!

How did the process of working with Tim reflect your wish to make a different record to My Heart’s Sick Chord (debut album)? Was the process very different?

D: Well MHSC was a studio record. After recording it we played over 600 shows and became a live band. I think you can hear that and Tim was very good at keeping the live energy.

E: Bringing Tim into the team was a pivotal moment for the whole recording progress of EVROPI. He was the one who saved us from sounding pleasing which was one of my biggest fears. I didn’t want people to consider our music as something you can listen to in the background. I wanted full attention and I wanted people to dive into our cosmos. So thank you Tim for separating the wheat from the chaff.

Evropi is out now