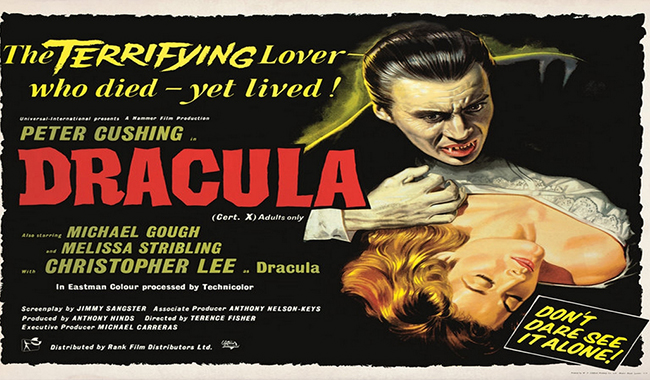 When Hammer released their remake of Dracula in 1958 they promised more blood and bright colour than ever before and inevitably received an ‘X’ rating for their efforts (today its DVD release is a 12 cerificate). ]Hammer had been making films since the mid 1930s, mostly B movies based off radio serials such as Dick Barton. In the mid-fifties they bought the rights to Universal’s series of horror films from the thirties. In 1957 Hammer Films released The Curse of Frankenstein (also recently released in the same glorious Technicolor), a period remake of the 1931 classic starring Boris Karloff as the monster. One year later Christopher Lee who naturally was unrecognizable in make-up returned as a monster of a different kind one year later in another remake of a Universal film, Dracula; this time Lee was the elegant dark, handsome and gruesome prince of darkness.

This is not just a straight remake of the Universal film, but a re-evaluation of the story in a compact 82 minutes. The posters at the time of the film’s release glorified the amount of blood in the film and the more sensational reviews also made this point. The blood is at its more apparent in the scenes involving the stakings which are very bloody indeed; not least of all when Dracula’s bride (Valerie Gaunt) is staked and ages before our eyes. It received its premiere in the US where it was titled ‘Horror of Dracula’ so as not to confuse it with the original. However, author Bram Stoker’s estate forbid much of the books use and this cost Hammer $40,000 to buy the rights directly from Universal. Jimmy Sangster’s script also stripped out all the supernatural elements and the geography due to its budgetary constraints. Much has, therefore, been changed starting with Lee’s caped Dracula dismissing the exotic Eastern European accent and instead as a tall, dark and gruesome gentleman of the evil Stewart Granger type and becomes something of a sexual predator. The film opens with Jonathan Harker arriving at Dracula’s castle where he is engaged as a librarian (and not the estate agent as set out in Stoker’s novel); Dracula’s castle is instead presented more as an aristocrat’s home instead of the dusty cobwebbed uninhabitable castle of the Universal film. Whitby has also been dismissed and is instead set in the fictitious central European town of Karlstadt (with local Buckinghamshire surroundings of Boreham Wood standing in for Transylvania) as have a number of peripheral characters including the madman Renfield been expunged; most of the names stay intact, however. Nor does Dracula shapeshift into a bat or a wolf and Cushing’s Van Helsing is explicit in making this clear. Not least of all the return of Peter Cushing, having starred with Lee in The Curse of Frankenstein as the Baron makes a welcome entry and would go on to play Professor Van Helsing in three other Hammer films. In these films Cushing is elegant and has command in every scene he appears in. Although he appears only more than a third of the way through the film he does have most of the dialogue, whereas Lee only has thirteen lines and speaks only to Jonathan Harker. As many of the commentators state in the extras Cushing and Lee have complete command of any of the films or scenes that they are in and here, as in most of their films, good or bad, they are indeed very classy actors who carry their roles with dignity (even in the bad films). Also this film has some of the big names of Hammer behind the scenes: Michael Carreras, Anthony Hinds and Anthony Nelson Keys (producer), the wonderful Terence Fisher (director), Jimmy Sangster (script), Jack Asher (cinematography), Bernard Robinson (art and production design) and James Bernard (music), making for a perfect storm for one of the truly great Hammer films. Indeed Bernard’s music is omnipresent throughout the film, with Bernard’s score standing in for the little Dracula actually appears in the film.

Made at a cost of £81,413 (with Lee only receiving £750 for his role), it is estimated that since its release it has made over $25 million and almost immediately was recognized as a classic.The film was directed by the man who would become a regular Hammer horror director, Terence Fisher who struggled with his limited budget to make the film and as a critical success it marked the way for the gorier horror films that followed and has continued since. Viewing today it is hard to believe that these films are the forefathers of such films as The Evil Dead, Mario Bava and Herschell Gordon Lewis, but the gentlemanly presentation is still irresistible to any horror film and I for one get a warm fuzzy feeling watching these old Lee/Cushing Hammer films.