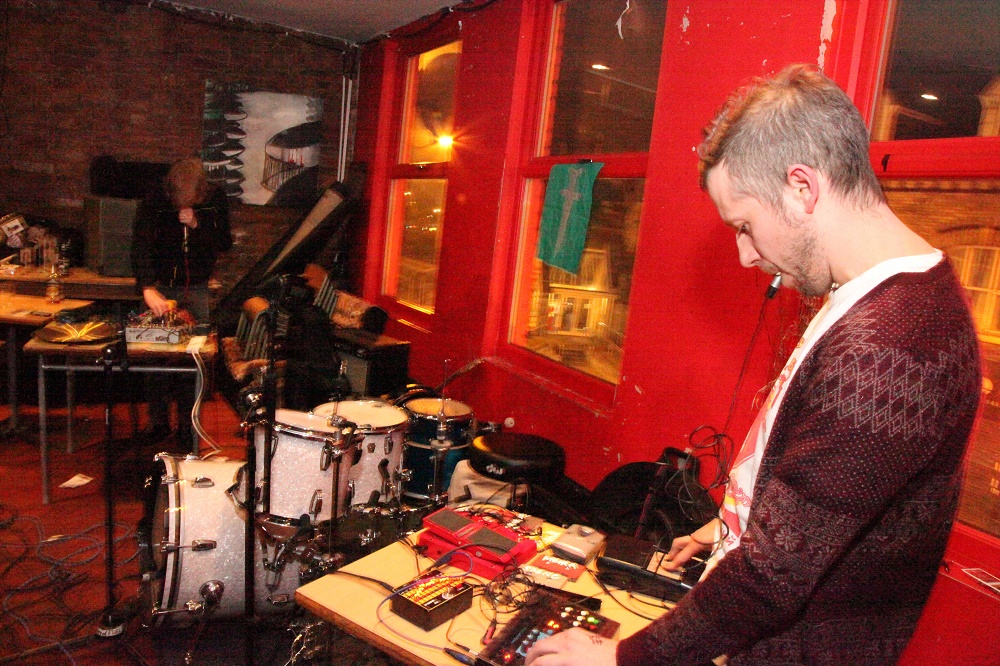 When there’s a musical event in the calendar that will feature David McLean and Tombed Records, that’s an enticing proposition in its own right. When the city centre is swamped with the once-a-year-revellers who think wearing a Christmas jumper is enough to justify immediate service from heavily overworked bar staff, nipping into the suburbs away from the mayhem just seems a good idea all round. So, congrats to Fuel Cafe bar who seem to have slipped into my subconscious by default with five gigs in as many weeks. In particular, cheers to the Very Bon group that organised this event.

Judging by the large crowd, its not just myself who had that opinion, as the upstairs music area was packed with both musicians from other bands and seasoned gig goers, so for the four bands that performed, microphones were a bit surplus to requirements as there wasn’t a single vocalist on the bill. That said, there weren’t that many three minute love songs or even songs lasting three minutes either.

In the end, it was an enticing exhibition of musical dexterity allied to ability and intricacy – first up were Yerba Mansa, the duo of Edwin Stevens & Andrew Cheetham who will contribute considerably more to the event during the course of the evening. Delivering a blistering set that dragged you into the regular, at times hypnotic, rhythms, some of which emanated from the pulsating drumming, at other times from the snagging guitar demonstrated perfectly that the adage about “the opening band is always crap” depends entirely on who is curating the event.

At some point during the evening a guitar will be scraped along a wall, rubbed across a judiciously placed table or have its strings set fire to, courtesy of Tombed Visions. A saxophone will be made to squeal, not in the way of a solo bridge by Spandau Ballet, but a more primeval, visceral manner by David McLean. All the while the crowd grows in size and louder in their appreciation.

Akke Phallus Duo, are, well yes, a duo formed by Jon Marshall and Ben Morris. Stood on the opposite sides of the floor, hemmed in by the audience, they create a noise wall, engineered with the use of a foot pedals, effect boards and a cassette tape recorder of the type used in the 70’s in order to illicitly copy songs from the top 40.

By about quarter past eleven, one drum kit has been disassembled and a different setup knitted together. Another saxophone has been purged, this time by Colin Webster, and a double bass has been uncovered and tested by Otto Willberg. This seeming incongruous line up is supplemented with a guitarist, David Birchall, who has as tendency to play the guitar with it laid flat across his lap. Cheetham completed the line up with his second appearance on drums. A fiery intensity built up as the strings of the double bass were crossed with a violin bow that quickly shredded, before subtlety returned as drum skins were gently caressed, all a prelude to the next surge of momentum.

If ever there was one, this was an early Christmas present from Santa for the music fan.