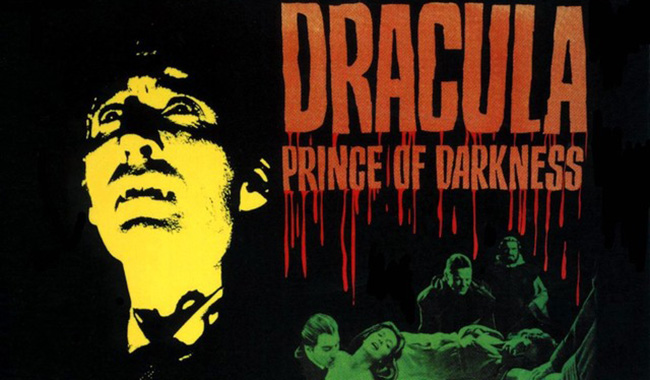 Dracula, Prince of Darkness was made in 1965, seven years after the original Hammer Dracula and released theatrically in January 1966. There is some continuity to the original, in spite of having a stop gap with the wonderful The Brides of Dracula in 1960 (which had starred Peter Cushing return as Professor Van Helsing). This film was made back to back with three other Hammer films at £100,000 apiece thereby saving the company budgets (the studio was notoriously tight budgeted) and sharing the same sets. Two of the other three films were The Reptile and Plague of the Zombies. This was quite a daring cost saving venture for Hammer studios who had been having financial difficulties. As a result Dracula, Prince of Darkness was shot back to back with a similar cast in Rasputin, the Mad Monk utilising the same sets. This for many is the archetypal Hammer film: vampires, stranded Victorian English travelers in a central European country, Boreham Wood locations standing in for Central Europe, blood, hints of lesbianism, villagers in taverns and of course Christopher Lee in his second outing as Dracula.

It isn’t until halfway through the film for Chris Lee’s Dracula to make his appearance. In the meantime the opening of the film casts the audience back eight years to the climax of the 1958 film with a foggy edged flashback (looking like the close-up of an eye) in which we witness the finale dual between Peter Cushing’s Professor Van Helsing and Dracula until the Count is finally immolated by the sunrise turning him into dust. The story then turns to a tavern with an Englishman in a party of four ingratiating himself with the locals by partaking in a yard of ale drinking competition. A rather bombastic Father Shandor (Andrew Keir) enters warning the travelers (having already stopped superstitious villagers from putting a stake through a dead girl as a precaution of any vampirism) not to make their way to Karlsbad by night. The travelers take this to be superstitious nonsense, but when the coachman (sounding more like a London cabby) refuses to take them any further a mysterious riderless carriage pulls up and takes the party up to the nearby Castle Dracula. They are eventually greeted by a manservant called Klove (Philip Latham) who tells them that his master is dead but continues to serve. The following morning one of the group has been taken by Klove and in a memorable and for the time shocking sequence he is suspended over an empty sarcophagus and his throat is cut in a sacrificial manner bringing the Count back to life. Dracula then vampirizes the dead man’s wife (played by another Hammer favourite, Barbara Shelley). The surviving pair then just manage to escape and seek the help of Father Shandor.

The film does take a little too long to get to the action and is a little talky in places, but it is made in typical Hammer style and is beautifully handled by the genteel Terence Fisher in the director’s seat. With the aid of some typical Hammer lighting and cinematography, not to mention a return to James Bernard’s score he used to similar effect in the original Dracula the film is effective if lacking the freshness of its 1958 predecessor. The audience is left waiting for Lee’s appearance as Dracula to the point of almost wanting to give up. But when he does finally arrive Lee is bereft of dialogue and has none of the intelligent gentlemanly monster characteristics he has in the first part of the original film (for the second part of that film he does not speak) and is instead just a monster. Matthews is a little hammy as one of the party, Keir dominates the scenes he is in, but it is Barbara Shelley as the worrisome Helen who provides the best performance as she transforms from a wary and conservative lady into a sexy lesbian lusting vampire. She snarls and hisses and acts in a superbly delivered performance when taken by Father Shandor and the monks to be staked on a table. Once staked the next shot shows her with a peaceful face, no longer inflicted as a vampire and can finally rest in peace. The blood is unrealistic but is in typical bright garish colours using Hammer’s Techniscope process, particularly in the scene of the neck slitting to revive Dracula in one of the most fascinating scenes in the film which has a hypnotic dreamlike quality to the way it is filmed. Some of these examples are clear as to why Fisher is so venerated among horror fans creating the classic look to Hammer horror.

It has often been written that Christopher Lee did not speak any lines in the film under protest at playing the Count for fear of being typecast. But this was more than Lee simply throwing his toys out a pram but instead because he thought Jimmy Sangster’s dialogue was so awful, appalled at such lines of dialogue as Dracula calling himself the “prince of darkness” being expunged. Lee did however actually say these words in later Hammer Dracula films. For any Hammer film it always is a nostalgic treat to re-visit these film again and again as I like spent much of a mis-spent childhood watching and enjoying the old Hammer films and continue to do so even if some of them such as this film are not the best of them.