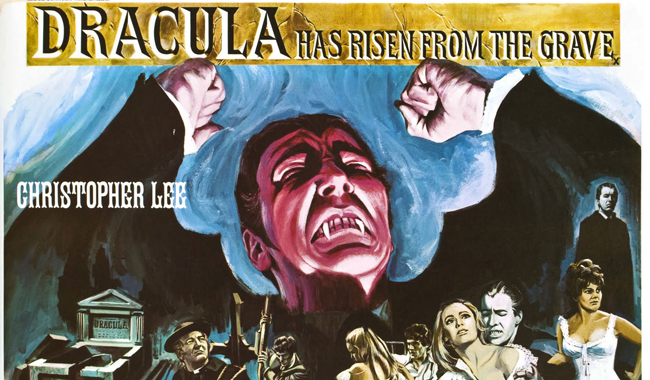 Icons: Christopher Lee – Dracula Has Risen From The Grave Review

In 1968 Hammer moved from its long standing studio at Bray in Buckinghamshire and found a new home at the bigger sprawling Pinewood Studios. For many this meant the beginning of the end for the family feel studio that many considered home. Indeed Hammer did lose some of its individual charm and many had long since grown tired of the studio’s association with horror, despite horror being what the studio did best. However, in recognition of the studio’s achievements on 28th May there was a ceremony held at the studio during the filming of Dracula Has Risen From the Grave in which the Lord Lieutenant (and not Her Majesty) presented the studio with the Queen’s Award for Industry. The scene the Lord Lieutenant witnessed being filmed was the final death scene of Dracula.

Despite the colourful title of the film this was a fairly standard Dracula film set just one year after its forerunner, Dracula, Prince of Darkness. It opens with a village square. A town simpleton enters a church when blood drips down the bell tower rope. When he tentatively goes and investigates a dead female body swings down from the large bell (ignoring the fact that in previous Dracula films the Count is unable to enter consecrated ground that continues with later Dracula films). Meanwhile a local priest (Ewan Hooper) has lost his faith prompting a Monsignor (Rupert Davies) to arrive and put him back on the right path while the spectre of Dracula begins to loom again. The priest travels with the Monsignor to Dracula’s castle, but the priest becomes separated, falls, knocking himself unconscious while blood from his wound drips onto some frozen ice (where Dracula was killed in the aforementioned Dracula, Prince of Darkness) awakening the Count (played by Chris Lee of course). Dracula goes back up to his castle in the twilight only to discover that the Monsignor has nailed a cross to his castle denying him entry. The priest is now under Dracula’s spell and control. Dracula wants revenge and plans to corrupt and vampirise the Monsignor’s niece, Maria (played by the beautiful Veronica Carlson) who is dating a local boy, Paul (Barry Andrews) who lives above a tavern. Paul, on visiting Maria’s mother for the first time upsets the family by declaring that he is an atheist and doesn’t believe in God. The net tightens when Dracula first vampirises and kills the local barmaid (Barbara Ewing) before he decides to turn on Maria.

The film was directed by Freddie Francis, second only to Terence Fisher as Hammer’s leading director. He had made a handful of films at the studio but had mostly made them at Hammer’s rival, Amicus. Francis has always said that he disliked being known as a director of horror films and always attempted to bring other elements to them, yet found breaking away from the genre difficult. The element he aimed to focus on was not the horror or the blood, as plentiful as it is, but instead the relationship between the two young lovers and how the conflict with the tall, dark and handsome Count gave Maria her sexual awakening. On paper and in the story this works were it not for the limited acting talents of the young Andrews and Carlson. The blood is plentiful and as is typical for the late 1960s and early 70s is over the top and too red while the sex is becoming more direct with Ewing’s slutty barmaid and the erotic tension created when Dracula seduces Maria and while he bites her neck she is seen to grip the bed sheets in ecstasy. But there are a handful of Hammer regulars here. As well as the aforementioned Lee and Francis there is also a rather hysterical but typically Hammeresque score by James Bernard, character actor Michael Ripper’s appearance as a baker and apprentice master to Paul as well as Veronica Carlson who would go onto appear in a number of Hammer horrors.

According to Francis everyone had fun on the set, with the exception of Christopher Lee who was often seen around the set as moody and serious. He was not happy at being typecast in playing the Count again and was only persuaded back to Hammer by studio executives (a pay incentive?). Curious then that he would go on to play Dracula a further four times for Hammer over the next 5 years plus the Jess Franco German/Spanish co-production, Count Dracula in 1970 (Lee was much happier with this film as he felt it was closer to Bram Stoker’s vision of Dracula). This time though, unlike in the previous Dracula, Prince of Darkness at least Lee’s Dracula had dialogue and had a little more to do and say. Lee was tall at 6’5” and is often shot from a lower angle looking up giving an even greater sense of height. Again, as in other Hammer Dracula films there is an overuse of the red contact lenses causing Lee’s eyes a great deal of discomfort, as well as the final death scene where he is impaled on a cross and his eyes begin to bleed as stigmatas. To add further atmosphere and other worldliness to his character Francis allowed Hammer regular cinematographer Arthur Grant a good deal of freedom with the camera. Francis himself had been an Oscar winning cameraman and operator having worked regularly with the likes of John Huston and winning an Oscar as Best Cinematographer on the genuinely creepy The Innocents (1961). Francis suggested using red gels on the edge of the lenses giving a both colourful and hellish atmosphere to the scenes in which Dracula appears in the cellar with his coffin.

Dracula Has Risen From the Grave is not Lee or Hammer’s best but is in keeping with the series and the problem again arises that a talented and reliable actor as Christopher Lee doesn’t have a great deal to do, proving that his mere presence is enough. Never the less in two years’ time he would appear in two further additions in close succession.