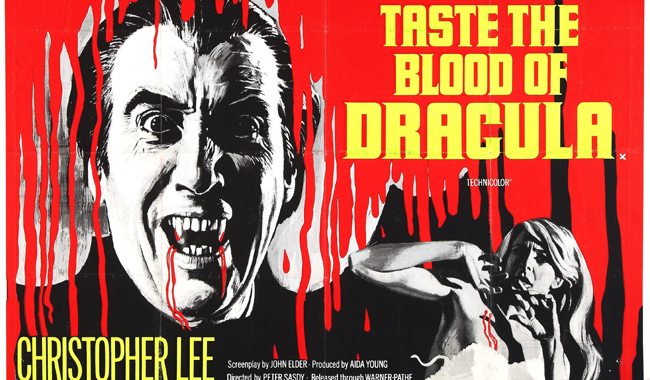 Taste the Blood of Dracula opens where Dracula Has Risen From the Grave left off, making this the fourth film in the Hammer/Lee franchise. A traveller (Roy Kinnear) is thrown out of a coach hurtling through a wood. He stumbles on an unimaginable scene in which Count Dracula has been hurtled from his castle walls and is impaled on a cross. The traveller witnesses the Count’s bloody demise. He ventures down where he sees the Count’s body turn to ash and powder. Subsequently he gathers up the dried blood, cape and ring. After the credits the film moves to Edwardian England and shifts its focus on three ‘gentleman’ who lie to their families and say they are carrying out missionary work in the East End but are in fact regular frequenters at a decadent brothel where they go once a month. There they schmooze and party with the courtesans. Feeling bored and suffering ennui their lives are given a new lease of life when they come across a Lord Courtley (Ralph Bates), a disgraced Lord who is known to practice Satanism. They are intrigued and he tempts them to try the ultimate thrill in selling their souls to the Devil. Through the traveller they purchase for 100 guineas the cloak, phials of blood and signet ring belonging to Count Dracula and join Courtley at an abandoned church. During the ritual Courtley puts the dry blood into goblets, wears the cape and cuts his hand to allow the blood into the goblets which bubbles up on contact. The three men become fearful and refuse to drink the blood but when Courtley does he writhes in painful agony when he is kicked and bludgeoned to death by the three gentlemen. They flee and in a flash of lightening Dracula appears and vows revenge on those who have killed his servant. The Count focusses his attention on the daughters of the men.

This fourth film is by far the best in the series since Dracula but still leaves Christopher Lee with little to do as an actor. It was directed by Peter Sasdy, a Hungarian émigré who had a good understanding of the story he was dealing with and whose first feature this is – he would go onto direct a few British horror films in the early 1970s. Written by Hammer regulars John Elder and Anthony Hinds the original story did not have Christopher Lee in mind as he was still begrudging donning the Cloak again. The story was written that Lord Courtley would drink the blood of Dracula and become Dracula’s successor similar to what occurred in The Brides of Dracula (1960) with David Peel taking on the role of Baron Meinster as Lee refused to play Dracula in this direct sequel to the original 1958 film. However the then Hammer film distributors, Warner Brothers refused to back this and insisted that Lee should play the part (no doubt with a financial incentive) and took on the role. As with Dracula Has Risen From the Grave, the cinematographer was again Arthur Grant and used effective coloured gels around the edge whenever the Count appeared on the screen giving an otherworldly hellish tinge.

There is an underlying darkness to this film that comes off more successfully than in any of the other Dracula films. This is working particularly effectively by moving the location to Edwardian London. Many critics have seen this as negative but works well on two levels. Firstly there is continuity to Bram Stoker’s original story that transfers from Transylvania to Whitby in Yorkshire and secondly the moral behind the film is one about Victorian hypocrisy. The support cast too is one of the strongest in any Hammer film that is led by superb villainous performance by a stalwart of British film, Geoffrey Keen. He is a well-known character actor who often plays detective inspectors, civil servants and Ministers (including in many a James Bond film). Here he plays the leader of the three ‘gentlemen’, William Hargood. Hargood, married, has a daughter, Alice (Linda Hayden) who he treats very strictly and refuses her to date the young Paul Paxton (Anthony Higgins) because he is the son of the man who also knows his dirty secrets and one of the three (played by ‘Last of the Summer Wine’ actor Peter Sallis). Alice and her friend Lucy (another name connected to the original Bram Stoker story and played here by Isla Blair) are seduced into becoming the Count’s assistants, foils and access to destroying the three gentlemen; Sallis’s character has the most gruesome death as he is staked through the heart by Lucy.

The character of Alice is an innocent and is played as such by Hayden. Her father is a rather brutish and stressed duplicitous ‘gentleman’ in an underrated performance by Keen. There is an element of paedophilic incest between father and daughter this is not mentioned by many commentators. His anger at her dating a younger man, albeit that he is the son of his friend goes beyond the story and speaks of jealousy. When he finds that she has gone behind his back to date Paul and sneaks in though the bedroom window, he takes his riding crop to her and seems to get some sexual satisfaction as well as a loss of control in this act. Evidence of this is found elsewhere. When the men are at the brothel, each of them is with one of the courtesans that reflect their interior lives. One of the men is an intellect (John Carson), who’s house is decorated in the Orientalist style; at the brothel he is with an Asian girl, while the weaker of three, Sallis is with a brassy red headed dominatrix and Keen’s Hargood is with a very young pre-teen looking girl (played by the young Madeline Smith who would go on to appear in many a gothic horror in the early 1970s). Hargood meets an unpleasant end when he is dispatched by his own daughter who cracks him over the head with a spade. “The first…” Dracula intones. As already mentioned Lee’s Dracula has little to do and acts merely as a conduit for the real story and that is the relationship between the father and daughter, making Freddie Francis’s focus on the two young lovers much shallower in Dracula Has Risen From the Grave and therefore Sasdy’s film more successful.

This was the last of the continuous four previous Hammer Dracula films with Chris Lee that in addition also takes in The Brides of Dracula. That same year Lee would be persuaded, much to his chagrin to once again don the cloak for a return in Scars of Dracula, but other than a reprisal of the role has no direct link to the previous films.