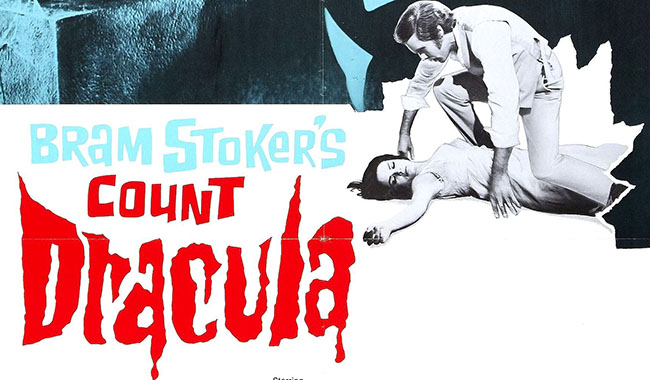 In 1970 Christopher Lee played Count Dracula no fewer than four times: two in Hammer films (Taste the Blood of Dracula and Scars of Dracula), appearing with Peter Cushing in a cameo role in the zany Dean Martin and Jerry Lewis comedy One More Time and in a Euro horror called Count Dracula (El Conde Dracula). This is quite a surprise bearing in mind that Lee had begrudgingly, even sulkily played the Count ever since Dracula, Prince of Darkness in 1965. Yet this was directed by his friend, the Spanish director Jesus (better known as Jess) Franco, a director known for schlocky exploitation horrors and sleaze films in the late 60s and early 1970s. This time Christopher Lee took up the offer because he felt that Franco was presenting a much more faithful adaptation of the novel than the Hammer films, despite some differences and changes of emphasis for artistic license. The films publicity also boasted that this was a more faithful adaptation.

During the opening of the film realtor Jonathan Harker travels by coach to Bistritz where he is to go to Castle Dracula and conduct a business meeting to facilitate the Count moving to England. He is warned of the dangers on his journey. At the castle he is greeted by the Count at the door (who was also the cloaked coach driver). His appearance is shocking compared to the previous Hammer incarnations of a tall, dark and gruesome Lee. His hair is long, wispy and grey with a drooping moustache. He walks with a stoop as he invites Harker into his spartan and gloomy castle. This is in fact a physical description closer to the one author Bram Stoker describes in the book and even bears a resemblance to the real Count Dracula, known historically as Vlad the Impaler. However, Franco’s set designs are gloomier, sparse, empty and dull compared to the well-lit interiors of Stoker’s novel. The scene where Harker sits down for dinner with Dracula is also sparse, separated as they are by a single candelabrum. Yet Lee still manages the lines so well and floridly spoken by Bela Lugosi in his iconic 1931 interpretation of the Count when hearing the howling wolves: “Listen, children of the night, what music they make”. Nor does Lee adopt the red contact lenses so prevalent in the Hammer films. Yet for all Lee’s outspoken comments about the British studio’s overuse of them (and discomfort) Stoker does write about the Count’s “blazing” eyes.

The film was criticised in some quarters for being dull but what it does have is floods of atmosphere and arguably way more than any of the Hammer interpretations. It only comes to life when Harker becomes locked in his room, is fearful and smashes his way out through the windows and outside. He collapses as he believes he is attacked by Dracula’s vampire brides only to then wake up in the Victorian English psychiatric clinic run by a Professor Van Helsing (although at no point does it specify in the film that we are in Whitby). However, this clearly looks like Spain and not Victorian gothic England. One of the residents in the asylum is Renfield (played with great gusto by German actor Klaus Kinski) who had previously been driven mad by Dracula and has resorted to eating flies and bugs. Harker is being nurtured by Van Helsing who suspects that Dracula is a vampire. This is confirmed when Lucy and Mina (Maria Rohm), the fiancée of Jonathan Harker become victims of Count Dracula. What also becomes apparent is that as Dracula drinks their blood he becomes younger. In one scene as he drinks the blood of Mina Dracula is caught (erm) red handed and hisses at his intruders. Needless to say that Lucy and Mina become living dead vampires and must be staked through the heart. Dracula’s coup de grâce is delivered as he tries to flee a ship and his coffin bearers are scared away and Harker and Van Helsing open the coffin to expose the Count to daylight and burn him to death.

There is a certain amount of bathos in the film such as actor Herbert Lom’s over the top performance as Van Helsing (Lom is better known as the long suffering crazy Inspector Dreyfus in the Pink Panther films) and among the best of all is Kinski in one of the best interpretations of the character yet bought to the screen (although Tom Waits made for a good one in Francis Ford Coppola’s 1992 film); rumour has it that Kinski actually ate real flies for the part.

Count Dracula was a West German – Spanish co-production although the Spanish locations are obvious. It is less sleazy than most other Jess Franco pictures as the director does not go down the same titillating path that Hammer films had already chosen to make. Nor is it gratuitous as Franco takes less focus on the bloody stakings and head decapitations than Hammer does with the majority of these taking place off camera. The film is slow moving and deliberate as it creates atmosphere and does help in breaking away from the prevalent cliché of Count Dracula. However, despite Lee’s desires for a faithful adaptation to the novel there were plenty of differences, but at least Lee has more to do than in the Hammer films. Not a classic but one worthy of viewing.