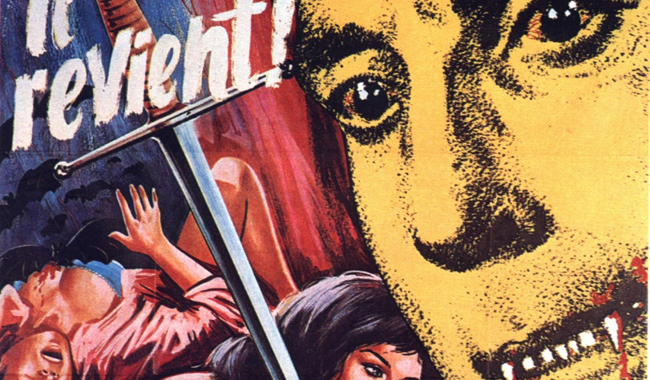 There is a noticeable difference in quality, or more accurately the drop in quality between the previous Hammer Dracula film, Taste the Blood of Dracula which had wrapped filming in December 1969 and Scars of Dracula which began production in April 1970. Previously Columbia Pictures and Warner Brothers-Seven Arts had distributed the Hammer films from Hollywood. However, now due to differences major Hollywood studios no longer wanted to work with Hammer executive Michael Carreras and refused to back most Hammer films, resulting in the studio looking to EMI for distribution which inevitably led to massive budget cuts to an already budget tight studio. The results are clear to see in this film, particularly in the poor painted scenery of Dracula’s castle which clearly looks like a cardboard cut-out. Yet, few as they are, the film is not without its graces.

On the surface it appears like any other Central European/19th century set Hammer horror. There is a long protracted opening that sets the film up with villagers becoming an angry mob after another young girl is sucked dry by Count Dracula (Lee) after he had been awoken by a bat dribbling blood onto his cape, ring and powdered blood brings him back to life. The villagers, despite the warnings of the priest (Michael Gwynn) march onto the castle, break past Dracula’s servant Klove (played by recently retired second Doctor Who Patrick Troughton) and set fire to the place. When the villagers return back to the their loved ones in a church they discover they have all been bloodily savaged and gouged to death by bats in one of the gorier scenes from the film. After the credits we cut to a birthday party for a young virginal girl called Sarah (Jenny Hanley, who later found fame on ITV’s answer to ‘Blue Peter’, ‘Magpie’). She is engaged to Paul (played by another soon to be major TV star, Dennis Waterman who would go on to co-star in ‘The Sweeney’ and ‘Minder’ after appearing in a number of British horror film in the early 1970s) who’s brother Paul (Christopher Matthews), something of a libertine is on the run after being caught with the Burgermeister’s daughter. Paul finds his only shelter for the night is Dracula’s castle, but he is unaware of the horrors that the place holds after the Count gives him shelter for the night. He is seduced by Dracula who interrupts there tryst. Dracula hisses at him and he escapes using a rope down the side of the castle (initially jumping out of bed in what clearly look like red M&S undies). Meanwhile, the Count stabs his mistress with what clearly looks like a rubbery blade. His fate is unknown until later. The rest of the film is taken up with Paul and Susan’s efforts to discover what has become of their brother in the castle and using the simple minded Klove to uncover the secret, despite the wariness and suspicions of the villagers.

Later producer Aida Young described Scars of Dracula as unmemorable and the beginning of the end for the studio. Although there is some mild nudity and noticeably more gore and blood it was already lacking the sharpness of the scripts as the aforementioned Taste the Blood of Dracula. Elsewhere, as mentioned there was mild nudity, but not the more overt sex/nudity Hammer was flirting with in such lesbian vampire films as (the better) The Vampire Lovers which was made at the beginning of 1970 and also directed by this film’s director, Roy Ward Baker. The young male actors have often been a weakness of many of the Hammer films going back to the early 1960s whereas there was a (misogynistic) use of sexy girls/models and actresses. Baker later bemoaned the fact that Waterman was too weak for the part (and not the tough guy he would later portray as Carter in ‘The Sweeney’). Scars of Dracula was also the first Dracula film since The Brides of Dracula (1960) that was not connected in continuity or as a sequel to the original 1958 Dracula ending the run of three sequels. It had the look of the others but there was no other connection in narrative. Dracula too looked slightly different – he looked paler and more ‘undead’ than in the previous films. Christopher Lee was also given more dialogue this time, the most he had had since the 1958 film. He also had an opportunity to hiss and have his fangs drip more blood than before. And of course he wore the red contact lenses more, so loathed by Lee. Yet the viewer is still given the impression that Lee is unhappy to be once again playing the Count and was sleep walking through the film.

Sadly though Scars of Dracula does mark a downtown in Hammer quality and was released in the summer of 1970 as a double bill with the even more misguided The Horror of Frankenstein which starred future Darth Vader Dave Prowse in the role of the monster. The script and dialogue of Scars too is weak. Although written by experienced Hammer regular writer and producer Anthony Hinds some of the dialogue merely consists of single words such as “bat!” or “the cross” as Dracula recoils in horror at the sight of this, to him profane icon. The production values too are weak – from the wobbly castle to the rubber knife, wonky dialogue and a myriad of fake bats flying around this truly is Hammer being a parody of itself. The set piece ending though as Dracula is burnt to death is well done and we even see Dracula crawling up the exterior castle walls (a haunting image from Bram Stoker’s novel). The next Hammer film Christopher Lee would reluctantly return to playing the Count would update the characters of Dracula and a return of Professor Van Helsing to 20th century swinging London.