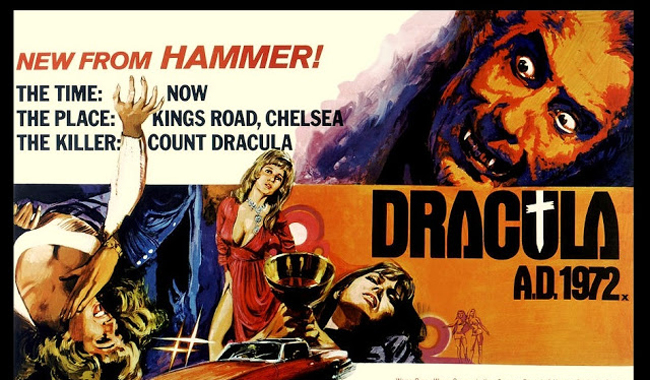 Inevitably after five Dracula films for Hammer, a comedy horror in Italy called Uncle Was a Vampire (1959) and Count Dracula (1970) in Spain and Germany as well as a myriad of other vampire films and horror films that Chris Lee and Peter Cushing appeared or starred in that there would be a modern updating of the character. This time though Hammer were not leading the way. In 1970 budget studio American International Pictures (AIP) had released Count Yorga, Vampire about a central European vampire (Robert Quarry) who finds himself in modern day Los Angeles as well as the classic Blaxploitation classic Blacula (also by AIP), a story that followed along similar lines was released a month before Hammer’s venture. Inevitable then that Hammer should follow suit and place Dracula into the swinging Chelsea set.

For the sake of continuity the film opens with a prelude set in 1872 with Dracula (Christopher Lee) and Professor Laurence Van Helsing (played by Cushing in his first repeat of the role since The Brides of Dracula back in 1960) fighting on top of a hansome cab as it speeds through (supposedly) Hyde Park until it crashes flinging both Van Helsing and his nemesis. Van Helsing emerges with a head injury but not before he sees Dracula killed off by the cab’s spoke wheel spokes. The Van Helsing family bury the professor in St. Bartolph’s church. Nearby a stranger buries Dracula’s ashes on un-consecrated ground near the church. In a wonderful segue to moving the action to modern London the camera pans to the sky with a commercial jet flying over as the credits roll with further shots of the Westway. With the funky with wah-wah soundtrack stepped straight out of ‘The Sweeney’ we soon are made aware that the film is clearly set in contemporary 1970s. To be precise the remainder of the film is set in September 1972, 100 years after the opening prologue.

The great granddaughter of Laurence Van Helsing, Jessica (‘Dynasty’s’ Stephanie Breacham) is living in Chelsea and parties with her hip Chelsea Set friends. The group have a new friend who has joined who likes to flirt with danger. His name is Johnny Alucard (Christopher Neame) and encourages the group to take part in a satanic ritual in a church set for demolition – namely St. Bartolph’s church from the beginning of the film. Johnny invites Jessica to take part in a ritual but she nervously refuses. Another member of Jessica’s circle volunteers herself (regular Hammer siren Caroline Munro). Johnny cuts his hand and covers her with blood while chanting for His Satanic Majesty to appear. Appalled, the rest of the group depart, leaving the terrified girl on her own with Alucard. In a puff of smoke Dracula appears and bites the neck of Munro.

On investigating the police belief that there is some ritualistic circumstances surrounding the mutilated body of the girl they find in St. Bartolph’s churchyard and call on black arts expert Professor Lorimmer Van Helsing, the grandson Laurence Van Helsing and advise him that his granddaughter is a possible witness. When the police leave Van Helsing warns Jessica that what she is involved in is dangerous but it soon becomes apparent that Count Dracula is using Johnny Alucard to get to Jessica Van Helsing and the Van Helsing blood line. He vampirises Johnny, who the police are now searching for when the professor realises that Alucard is Dracula spelt backwards (this gimmick had previously been employed way back in 1943 with Son of Dracula). Dracula takes Jessica to be his bride which inevitably leads to a book ended confrontation between Dracula and Van Helsing.

Dracula AD 1972 was slated on its release and having become so dated now that criticism has little waned having few fans short of the Hammer/Brit horror adherents. The script was written by Don Houghton who was now becoming a prolific writer in Hammer’s canon of films with some writing as lazy as its predecessor, Scars of Dracula. One of the problems with the film is that the script does everything to make Dracula weak rather than strong; he seems incapable of stepping out of the church and when Van Helsing lists the things vampires are vulnerable to it would appear that anything will kill them. The script sees setting Dracula in contemporary society as a problem. The original book’s author, Bram Stoker did the opposite. Stoker had set ‘Dracula’ in contemporary 19th century society where the Count could deal with lawyers, book a ship’s passage, read railway timetables and mix with society. Once again the script inhibits Lee from doing anything within the role other than increasingly snarl and hiss more than ever before. Cushing on the other hand delivers some lines convincingly in a bad film. Lee still looks elegant in the role despite now being 50-years-old and still commands a handsome presence, although he is sleepwalking through the role having made it plainly clear that he doesn’t like this attachment to the role. Never the less when either Lee or Cushing are on the screen and more so together that film comes alive. The film fails dreadfully with its younger cast, something Hammer were never good with. The dialogue is awful among the young people with the ‘hip’ language ‘man’ that was already out of date when the film was released.

The music in the film is over-baked and irritating in demonstrating its contemporary credentials and is directed by a newcomer to film, Alan Gibson who comes from TV who predominantly directed thrillers and is here focused on the action. Gibson would also go on to direct the follow-up to this film, The Satanic Rites of Dracula the following year which is really a continuation of Dracula AD1972.