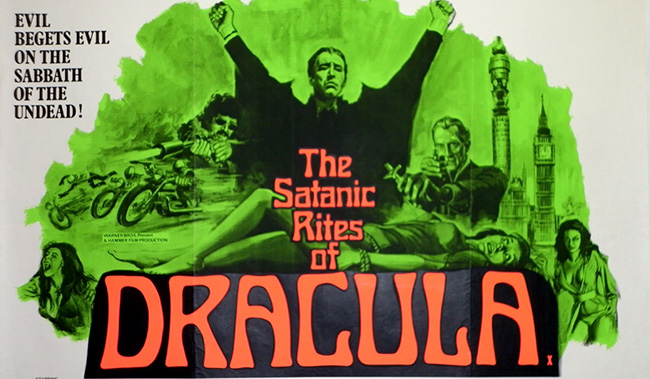 This was the 7th and last time that Christopher Lee would play Dracula for Hammer, but not the last time he would play the Count (see the awful French comedy Dracula père et fils from 1976 for that) and not the last time that Peter Cushing would play Van Helsing – that would be the Shaw Brothers Hammer co-production horror/martial-arts blended Legend of the Seven Golden Vampires in 1974. But this was the last for the Cushing/Lee pairing in the Hammer variant. Perhaps a more appropriate title might have been ‘The Last Rites of Dracula’ as this film took the franchise for the company about as far as it could.

It is in some ways an improvement on the gimmicky modern day setting of Dracula AD 1972 but does follow on almost directly but it contains a more involved plot. Never the less, it is still set in swinging London. This time there is the added element of the supernatural and a satanic cult which was becoming more and more popular since Rosemary’s Baby in 1968 and again with the recent The Exorcist (1973) not to mention the plethora of Hollywood and European variants that would continue until the mid-1970s. In this sense the latest Hammer/Dracula is an exploitative variant of these films. Originally titled with the gimmicky, jokey and frankly awful title ‘Dracula is Alive and Well and Living in London’, this film is set just two years after he had supposedly been killed off in Dracula AD 1972. In this film Professor Van Helsing (Cushing) receives a call from an Inspector Murray (Michael Coles – another hand down continuity character from Dracula AD) who reports that a criminal gang is possibly at the heart of the disappearance of prominent members of society including bankers and judges and that there is a connection with a satanic cult. On investigating, the police and Van Helsing discover that the investigation leads to a rich property developer living as a recluse in a brand new tower block called D.D. Denham built over St. Bartolph’s church (where Dracula was killed off in the previous film – although the speed the block was built and how he made his money so quickly is not explained). Van Helsing confronts D.D. Denham in a darkened room and discovers via the usual cross that he is indeed who he suspected, Count Dracula. But Dracula is no capitalist, he is heading towards an Armageddon. Meanwhile other people having been disappearing and soon one of them is Van Helsing’s daughter, Jessica (this time played by a young Joanna Lumley, replacing Stephanie Beacham). The investigation then leads to a country house where all the missing are being held. Van Helsing and the police try to covertly raid the house getting past all the biker security and stop the satantic ritual wherein Dracula plans to spread ‘bucculis pestis’ and spread a global plague.

As can be seen from the plot Dracula has gone from the tall, dark and handsome black prince and turned into something more like a low budget Bond villain after global domination. Although directed by the previous film’s Alan Gibson, this time round it is written by Don Houghton who, like Gibson mostly worked on TV and had also written the film’s predecessor. Houghton had written some scripts for Doctor Who for the BBC and some of those elements are visible here: Dracula is often referred to as The Master, an other worldly villain, Cushing’s Van Helsing tries to defeat his enemy through intellect and non-violent means with female assistants and with plenty of cliff-hanger moments. There are no Chelsea kids here as in the previous film, instead there are only the security force dressed in uniformal sheepskin jackets, polar necked sweaters and long hair as though a hippy army. The locations too are broadened out. The opening credit sequence has that widely used 1970s shots of London (using panning wide angled lenses) of Trafalgar Square with fleeting pigeons, South Kensington and Westminster played to a funky score and a double exposure of Dracula in his cape. It looks more like an episode of ‘The Sweeney’, but does set the scene.

There is plenty in the way of strong support including by regular madman Freddie Jones (he had previously played the monster in Frankenstein Must Be Destroyed in 1969), TV actor William Franklyn as a police inspector and of course the now super-famous Joanna Lumley as the Van Helsing’s daughter, although she doesn’t have a great deal to do other than be pretty and vulnerable before the final satanic sacrifice which in itself recalls Hammer’s earlier The Devil Rides Out (1968). The Count’s final coup de grace comes at the end when he chases Van Helsing and ends up being tangled in a hawthorne bush, something else Dracula is allergic too, representing the crowns on Christ’s head. This was the last time that Lee would play Count Dracula for Hammer and would mark a decline in Hammer horror films, they had been declining for some years now. It is well recorded that Lee allegedly detested playing Dracula and felt that all these films moved too far from Bram Stoker’s imagining. He would only act in one other Hammer film and through the decade Lee would favour bigger budget films. By the time he died in 2015 at the grand old age of 93, Christopher Lee racked up over 200 films and like Cushing would always bring dignity to the worst roles.