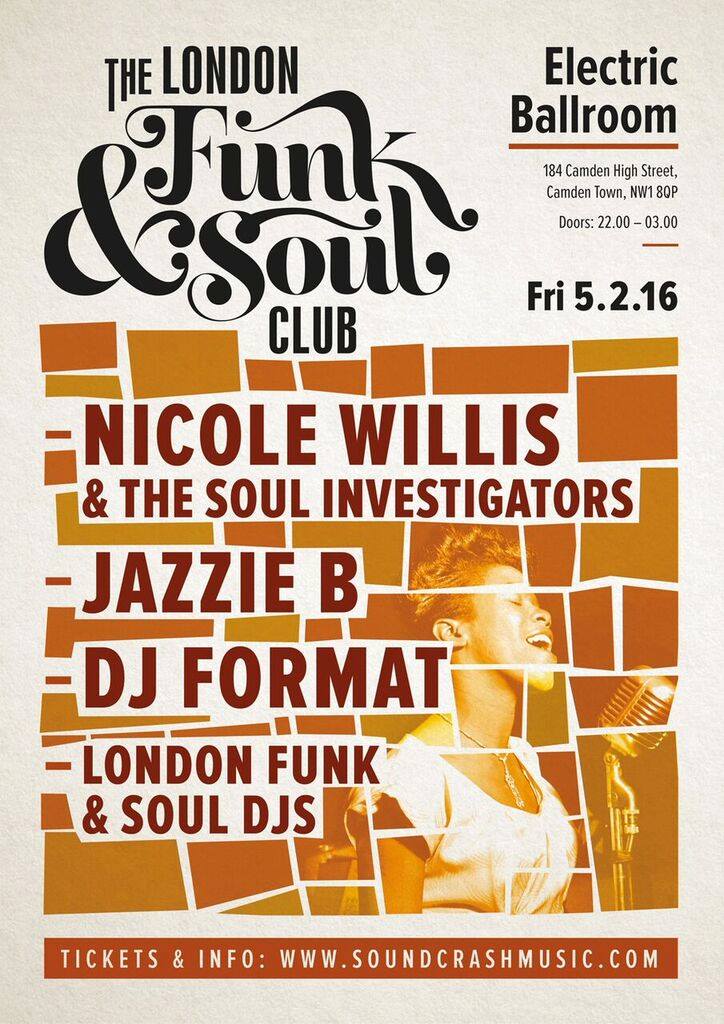 The London Funk and Soul Club ​i​s proud to present a truly international sound for their next event as they bring you the incredible N​i​cole Willis & The Soul Investigators​,​a group born in Helsinki but with roots that spread to Brooklyn. Deemed one of the greatest touring soul acts at the moment, they’ll be bringing their funky vintage sounds to Camden’s iconic Electric Ballroom on Friday 5th February.

On the same bill, Soul 2 Soul founder and one of the biggest authorities in funk and soul music Mr​ J​azzie B​ will delight the audience with one of his spectacular DJ sets, from the man regarded as one of the most influential pioneers of urban music.

If that’s not enough, then they also have the legendary D​J​ Format w​ho w​ill keep you grooving throughout the night. The sought­after hip hop, funk and soul DJ, who has collaborated with none other than Jurassic 5, is guaranteed to start any party with a bang.

To round off the night in Room 1, M​r Thing will be​ playing one of his incredible James Brown 45’s set. Former DMC champion, and member of Scratch Perverts, Mr Thing plays a DJ set like no other.

As well as all this there’s another room of the smoooothest grooves as The Jazzcotech Crew takeover Room 2. Weak At The Knees hosted by The Jazzcotech Crew ft. DJ Perry Louis (De Boss) & Guest DJ Deb Joy will be playing nothing but the boogie. Expect to hear some of the best, deepest Boogie tracks, JazzFunk nuggets and simply Rare Groove gems aimed at those who like to dance hard and get down at the get down!

Expect a night of beats and boogie, as some of the top artists in the funk and soul world join forces on this very special occasion and we’ve got a pair of tickets up for grabs.

One entry per Twitter account, prize includes entry to event only, all entrants must be 18+ and free to attend the event. Winners will be selected at random and notified via Twitter.