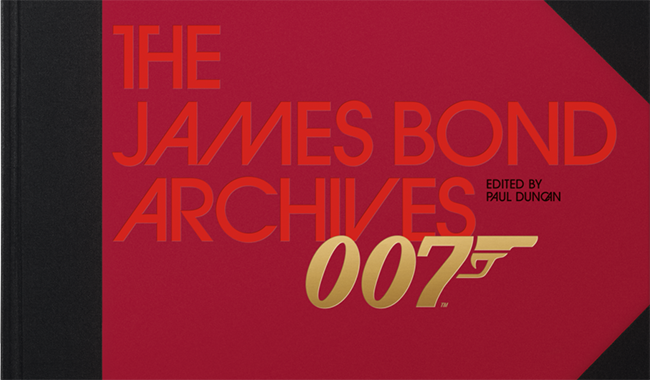 Taschen books first released this impressive volume upon the eve of the release of Skyfall. It was a very impressive book indeed, but was perhaps a bit out of price for what some collectors deemed worthy. No two ways about it, the content was magnificent, and it wasn’t in short supply either. Clearly thinking about this – for the release of the new film SPECTRE, the book has been given a revamp.

Not only does the book now contain a chapter on the new film, but it has been sized and  re-priced to an affordable level without diminishing the quality of the content. And for what you get – that asking price (now £45) is work every penny.

The book starts with a playboy interview of author Ian Flemming before moving onto the films one at a time.

Each film spends between 20-30 pages a piece, put together with interview excerpts about the genesis, making and release of each of the films. Almost as if it were in a Q&A style, but simply leaving out the questions. A narrative for each film is drawn out, and in the right places by the writer for each chapter. Occasionally they interject with facts about the film.

It’s an interesting approach and there is little to no risk of having to listen to an author waffle on when instead you are getting direct to the point facts.

Taschen has a strong reputation for delivering high quality scans and images, and although this is a smaller version of a book they published a few years back, the quality of images is second to none. They have also picked some of the best behind the scenes archival photographs to use as well. Dr. No in particular has some very famous behind the scenes shots (Connery cradling Ursula Andress from behind with both arms; Connery showing off his hand-stand skills on the beach), all here produced to a high quality.

The landscape orientation of the pages helps the edition retain the prestige coffee book appeal of the release. And at well over 600 pages you are really are getting quantity as well as Taschen quality.

It is a hard back release, and although there has been many Bond books out there, this is one of the top 3 you might want in your collection.