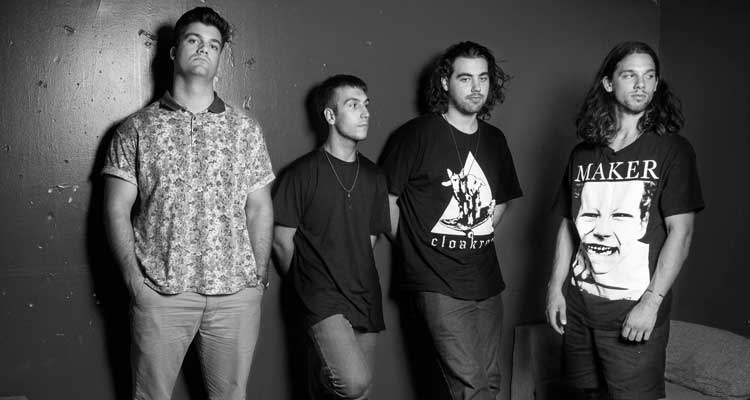 A chilly Sunday in Birmingham saw the Virginia Beach foursome, Turnover, play the sold out basement of The Rainbow. Opening up the show were Fullshore, a pop-punk four piece with soft vocals and plenty of support from the crowd. Fullshore knew how to put on a show, but unfortunately for the band, their stand in guitarist seemed to be a bit nervous, sometimes not knowing when songs ended or what the lyrics were. This can be forgiven for how humbled the band seemed to be for being able to play the show. Fullshore may benefit from investing in better equipment as this would tighten the whole set up – the band seem like they have a lot to give and were a great opener for Turnover.

Next up were the female fronted band Claws, a 90s grunge, emo revival style four piece. Claws were not tour ready, with the guitars and bass being out of tune and the performance being sloppy. Front woman, Josie Steward, put down her guitar for part of the set – unfortunately, this made no difference to the performance, the whole twenty-five minute set sounding like repetitive noise. The band seemed to carry an unjustified swagger on stage and they did little to get the crowd excited for the rest of the show.

Teen Brains were next up. They chose to tell the crowd how they all had hangovers – this was reflected in their tuneless and lifeless performance. Throughout the set it was difficult to hear what teen angst was being warbled over the microphone. Teen Brains did little for older members of the audience, a dull and numbing performance which did little to get the crowd excited for Turnover. Much like the two bands before them, they did not seem tour ready, nor did they seem excited to be playing a sold out show in the Midlands.

Finally, Turnover, the band everybody had been waiting for hit the stage and opened up with ‘New Scream’. The crowd passionately shouting back the lyrics provided such a warm welcome for a freezing cold night. Unfortunately, as the set went on, it became difficult to hear and even see what the band were doing. It became distorted and the majority of the set was reduced to feedback from the instruments; at one stage it felt as if the whole room was vibrating – this may have been due to the poor sound in the basement of The Rainbow but it did marr the show as a whole.

It is easy to tell that Turnover have been touring for a while, their performance seemed much more organised and put together in comparison to the earlier bands. This probably wasn’t Turnover’s best show of the tour due to the poor layout of the venue – the band couldn’t see the crowd and the crowd couldn’t see the band due to there not being a raised stage – but they remained thankful to see so many people coming out on a cold Sunday to watch them play.