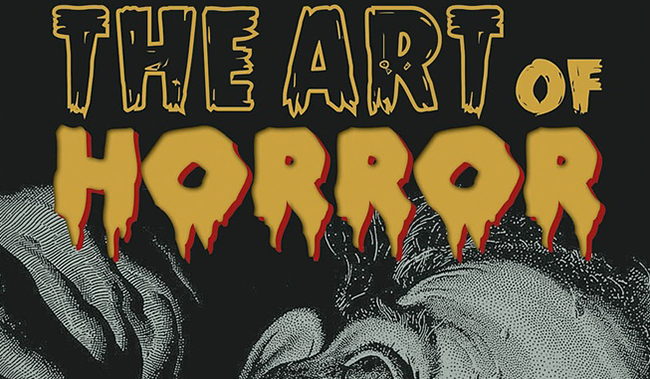 The Art of Horror: An Illustrated History Review

Published by Applause, ‘The Art of Horror’ is an LP sized, glossy and beautifully illustrated book, encompassing a broad church of horror subjects mixing within each subject films, books, legend origins and magazines and other pulp and of course art itself. There is some depth to the book as an introduction to each chapter covers the theme’s origins, whether it’s the origins of Halloween or how and why the novel of ‘Frankenstein’ was written by Mary Shelley following a dream. What cinema did, perhaps more than any other medium was create the icon in our minds eye: for Frankenstein’s monster, Karloff’s monster is our go to image, either Bela Lugosi or Christopher Lee as the caped Count (in this I would say that as an iconic image Lugosi has the edge) or the growth of Halloween since John Carpenter’s 1978 film.

Every page is brimming with colour illustrations with each chapter covering the themes of Dracula, vampires in general, Frankenstein’s monster, werewolves and the Wolf Man, zombies, mummies, ghosts, psychos and serial killers, Halloween, witches and devils, Edgar Allan Poe, H.P. Lovecraft, monsters and aliens. A fairly comprehensive list. It is interesting to note that Lovecraft is given a couple of chapters other a couple of pages of Poe. This is probably a mark of our the imagination of Lovecraft and his strange creatures have been realised in art. There is though not one single author but rather an editor, Stephen Jones with many contributors, but it does at least feel as though it is written with one voice.

Many of the large illustrations are mostly recent images and while brilliant in execution many are taken from film stills whereas ‘serious’ art is given to smaller reproduction images. The book would have benefited from more images from the likes of Goya, Hieronymus Bosch, Dali, Victorian art and such the like as their images have gone further to influence imagery in the cinema rather than the other way round as is the case with many of the more recent and larger images reproduced.

The press release for the book does boast that this is an original book and that there has never been a book like it. While it is true to say that the book is very comprehensive in its broad coverage of sub-genres within horror, there have been many books which go in depth on Dracula in cultural mediums such as films, plays, TV, literature and legend. The same can be said on books on Frankenstein and werewolves along with other subjects. This is even more so with science-fiction with some superb publications which came out in the 1970s such as David Kyle’s wonderfully illustrated ‘A Pictorial History of Science Fiction’. Never the less there is plenty of lush images to look at and avoids the more visceral images in horror for the most part. Also great to see reproductions of many of those wonderful pulp books of the 1920s and 30s such as ‘Weird Tales’ and ‘Amazing Stories’. A good coffee table book for horror aficionados but will also be enjoyed by beginners to the subject, much as I became interested in the genre as a 10-year-old with books of this type.