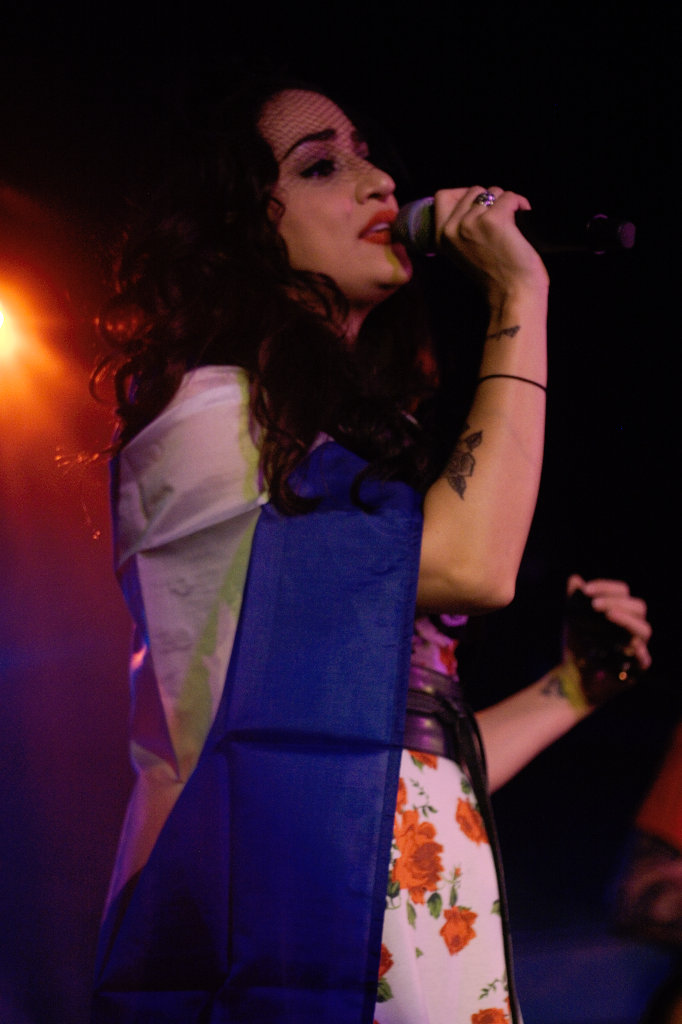 Canadian country/ roots singer Lindi Ortega played a fine set to a capacity crowd in Glasgow as part of the annual Celtic Connections festival. With Irish as well as Mexican blood in her veins. Ortega clearly feels at home in Glasgow, ending the night draped in a Scottish flag and wondering how to celebrate Burns’ Night.

The large crowd built early, giving opener Jordan Klassen a decent audience. The folk singer from Vancouver took his chance, his acoustic songs delivered over guitar and mandolin being very well received. The tender ballad No Salesman and country pop tinged Delilah were the pick of his set. Hs vocals strong and full of emotion, Klassen has a wide range, hitting the high notes well, and is clearly a talented songwriter.

Lindi Ortega’s set began with her backing band (guitar, bass and drums) laying down a fast beat before the star of the show burst into the spotlight. Energetic as always, Ortega was soon using all of the small stage as she danced and twirled, dress flying and trademark red boots seeming to twinkle in the lights.

Much of the set came from her most recent album, with the title track Faded Gloryville a real highlight. The song tells of broken down musicians living on past successes but Ortega explained that it is inspirational – perhaps a reminder of what could be. She delivered the track with typical passion, her slow and sultry vocals sung quite perfectly. Ashes was also superb, the powerful song showing that she can add volume to her voice when needed. Tell It Like It Is added a rock feel to the performance with some lovely lead guitar work on show.

There were several older songs played too. The country tinged sadness of Cigarettes and Truckstops was another highlight, while the acoustic Little Lie was beautifully sung. A slowed down cover of The Eagles’ Desperado saw much of the crowd joining in and the night ended with a quite sublime version of the classic Ring Of Fire.

Lindi Ortega is a born performer, so confident on stage and she seemed to be having a great time as she fed off the audience’s energy. This was a very entertaining performance, her vocal spot on all night long as she delivered a fine set, and the three man backing band also put on a very good display of musicianship. It all added up to an excellent night of high quality songs delivered with real style.