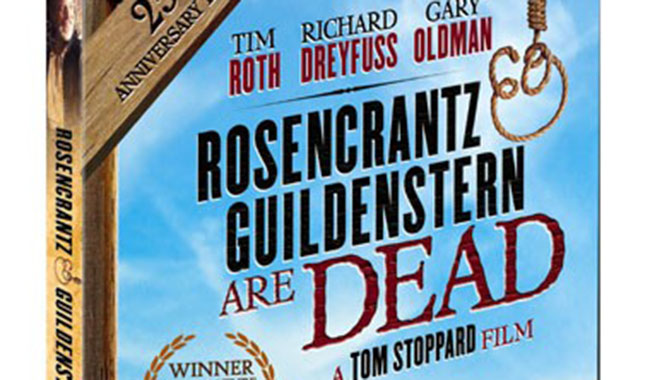 Rosencrantz and Guildenstern Are Dead the film is now 25 years old. Tim Roth and Gary Oldman were young, bright and hungry actors at the time and were very much well matched in this Hamlet-Aside story.

The lead characters of course enter the play of Hamlet much later on at the request of the King and the Queen to keep a keen eye on the Danish prince (here played by Iain Glen), and all too soon find themselves the brunt of the action as the titles suggests. This film (originally a play by Tom Stoppard who has adapted and directed it for the screen here) shows us things from their possible perspective as they travel, arrive, are interwoven into events and how the outcomes comes about despite their honest intentions.

Smart, witty and downright hilarious at times both Oldman and Roth are on fire here. The film very quickly became a bit of a cult hit and remains so today, and if it were not for the revisit to it on disc release it was perhaps in danger of being forgotten about, despite just how relevant it remains today.

The dialogue is so fruitful throughout and is a true gift for gifted actors. Fans of Shakespeare will simply soak up what they hear on screen – This also acts as an interesting precursor to Shakespeare In Love.

There are some very worthy interviews on the supplementary material.  Disc 2 carries separate interview with the writer/director Tom Stoppard, Gary Oldman, Tom Roth and Richard Dreyfuss.  Stoppard and Oldman’s interviews are both an hour long. Roth’s is close to the half hour mark and Dreyfuss in between.  These are fascinating interviews conducted by the producer of the movie and really takes the talent back to the time in their careers and tracks them through the production and how the play and the film meant to them. These interviews are taken from a previous release from the DVD back in 2003.

Stoppard though was also interviewed in 2015 for this update, and again the interview is close to the hour mark.

Simply put the material doesn’t date; it only dates well and with grace.