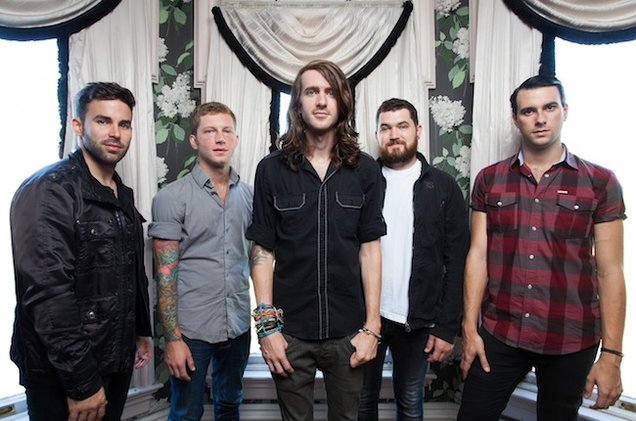 Florida pop punks Mayday Parade recently released their latest album ‘Black Lines’ after over a decade in the music business. Glasswerk staff writer Iqra Choudhry sat down with them at their recent Newcastle show to find out the secret of their success:

I’d probably say that you guys are veterans of the pop-punk scene. You’ve been a band for just over 10 years. When you started out, did you see yourselves still touring a decade later?

You know, it’s always so hard to say, with stuff like that. This is probably typical, because we were like nineteen when we started this band and like most nineteen-year-olds, I wasn’t looking ten years into the future. We wanted to start a band and do everything we could to get it off the ground and get touring and establish ourselves, to be able to keep doing this. Everything was planning out six months to a year ahead and I didn’t imagine it would come as far as it has, or last as long as it has, so it’s been a wonderful surprise to be able to do this at the level we’ve been doing this, for as long as we have. It’s been a lot of fun.

Your latest album is ‘Black Lines’, which you released in October 2015. How’s the reception been to it?

I think it’s been good! Like each album before it, it’s kept us on track and moving forwards. None of our records rocket or do anything insane, but we get to keep on down this path and get to keep on having a lot of fun. The new stuff is a lot of fun to play live – it’s energetic and heavier and I feel like it’s really cool to have people singing along and enjoying themselves.

Which song do you think you’re proudest of on this record?

Well, it’s tough to say, but I’d say the first one, ‘One of Them Will Destroy the Other’. Only because it’s the only difficult song on the record. It could have gone a lot of ways. Every single step of that song divided us, with half of us wanting to do one thing and half of us wanting to do another. With so many things – the key, the tempo, the lyrics. We were so divided with how we wanted to do it, but because of that, I feel a lot of hard work went into it. So, it’s tough to say, but maybe that one.

What’s the last song you heard that you wish you’d written?

A song called ‘Noisy Heaven by Beach Slang. And that was yesterday, honestly.

What was the first show that Mayday Parade played as a band?

The first show that we played as Mayday Parade was in Tallahassee, Florida at a place that was then called the Beta Bar. It was sold out, we played to a few hundred people, because we’d been two local bands that had split and formed Mayday Parade. So, locally this was a buzz, so we were fortunate to have a strong start-up.

And was that the first show you guys got paid for as a band?

What would you say were your best and worst shows?

Well, it kinda depends on how you look at it. Best show? It’s hard to say which one, but we love Starland Ballroom in Sarahville, New Jersey. It’s one of our favourite venues in the whole world and we’ve played there six times in the last six years. They’ve all sold out and been incredible shows, so one of those but I’m not sure which one.

And worst? There have been some bad ones. I’d say the worst for me was a long time ago, maybe early 2007? We did a tour with Plain White Ts, and we were playing to eight hundred, maybe a thousand kids each night. We were the opening band and it was a really big deal at the time. The first show was in Green Bay, Wisconsin and it was January so it was really cold. I was really nervous, it was the biggest show we’d played at that point and I slipped on the ice in the parking lot fifteen minutes before we played. I went out and played the show, but my eyebrow was cut and I was bleeding into my eyes. I don’t really remember it, but after the set I ran to the bathroom and started throwing up, blood started pouring out of my nose. I had a concussion and I’d fractured the bone under my eye, so I had a black eye for the rest of the tour.

Way to start a tour with a bang! To your head, I guess. What was the first show you went to as a kid?

The first show I went to was SR71, Nine Days and American Hi-Fi, and it was a really cool show. Afterwards, my ears were ringing like crazy because it was the first loud sort-of club experience I’d had.

You guys have just come off the AltPress tour with As It Is and they’re known for pranks – did they pull anything with you guys?

We didn’t really pull pranks. Everyone ran out during Alex’s guitar solo, sliding on their knees and everything. But that was just fun. It’s been a long time since we pranked – in the early days, when we were on van tours and playing tiny shows, some of those pranks would get brutal. I like more light-hearted stuff. I think Powerspace – and I love those dudes, but they did something with hairspray and torching stuff and I think Travis from We The Kings got burned. Not badly, but still – that was too intense.

Absolutely. That’s one of the craziest things about all this. I’d say almost every city we go to, ninety to ninety-five percent of them are cities we’ve been to before. So most of where we go, there are people we recognise. You might not know their names, but you know them and you’ve hung out with them and that’s such a crazy part of all of it. And there people who have been coming to these shows for close to ten years and some people that have seen us like twenty times or more, so it’s pretty wild. But we’re very lucky to be able to have that.

You’ve got another co-headline tour with The Maine after this run. What’s it been like touring with those guys?

The coolest. They’re like our brother band. We’ve known them for so long. I met them eight or nine years ago, so it’s been a long history of touring with them and I feel like bands are similar in a lot of ways and our careers have a lot of similarities and we love to hang with them. Each time we’ve toured the UK, we’ve shared a bus. We just get along really well.

You guys have toured some crazy places. Is there anywhere you’d like to go?

I’d like to go just about anywhere that we could, y’know? I love the travelling aspect of all this. I certainly want to go somewhere in Africa, and bands do got there. I’ve heard of bands playing Egypt, and who knows? So, I’d love to do that. And more of South America. And China – I’ve been to an airport in China, but that’s it, so I’d like to play some shows. Anywhere – Dubai! I’m fascinated by it, I’d love to play there, so hopefully that’ll happen.

Finally – what advice would you give to bands who are just starting out?

Well, everything’s different from when we started, but just work hard, take it seriously if you wanna be taken seriously and have fun with it. If you’re not having fun doing what you’re doing, maybe you should look at doing something else. So enjoy it and stay positive and figure out how you’re gonna make it happen – don’t just wait around.