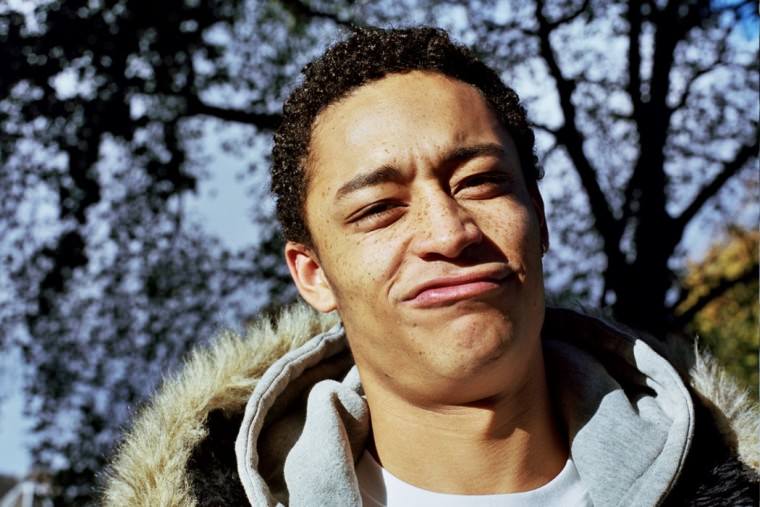 Hip-hop has had, it’s fair to say, something of a major resurgence on the Liverpool scene lately, not least thanks to the efforts of the likes of the No Fakin’ Crew and Bam!Bam!Bam! who are bringing top quality artists to the city on a regular basis. Tonight is the turn of South London up-and-comer Benjamin Coyle-Larner aka Loyle Carner and Kitchen Street is fit to bursting point for a name that elsewhere in the country might not be receiving quite the same attention.

Carner is clearly aware of this, striding onto stage in an LFC shirt proclaiming that tonight is special because he’s finally “home” – born in Liverpool but raised in South London, he’s visibly touched that his name is starting to gain traction so far from where he now lays his head. Dealing in a sensitive and emotionally packed strain of lush, laid-back beats with deeply personal and confessional lyrics, he’s a young man with an old head on his shoulders.

The crowd take a little time to warm up tonight, with mid-set highlight and recent single ‘Ain’t Nothing Changed’ eliciting the first real response of the night, but it’s not for lack of appreciation. Part of Carner’s appeal is how densely he compacts social observations and the minutiae of human interaction into his lyrics, something which for obvious reasons takes some time to assimilate in a room where visibility is limited to around 3 feet due to the dense weed fog currently pouring out of the lungs of half the room.

For all the swagger and bravado on show elsewhere in the young men of contemporary rap, Carner’s bare honesty and strength in revealing his innermost fears and desires is to be applauded – with the suicide rate amongst men still so high and the “man-up” culture still inexplicably proliferating, it’s genuinely refreshing to see a youngster like Carner prise open the lid and open up about the effects of his step father’s death (“he raised me, he was my real dad”) or the struggle to help support your family financially whilst still essentially a child yourself.

An acapella rendition of a snippet of the tender ‘Florence’ is met with rapt attention from the audience but admittedly loses some of the tracks impact without the smooth, minimalist beats of the recorded version. Still, it’s a touching missive to the younger sister that Carner never had and is another typical display of this thoughtful young man’s explicitly sentimental approach.

The whole night feels very personal and culminates with Carner bringing out a Cantona shirt in a tribute to his dad, by which time there are a few lumps in the throat of even the hardest heads at the bar. Anyone who can get a room full of Scousers to chant “ooh-ah Cantona” must be doing something right, but there’s still a little way to go until Carner’s live show matches up to his exquisite recordings. There’s little doubt that he’ll get there in the end, as his drive and ambition seem boundless, and his unique and compelling voice is an essential component that – until now – we didn’t even realise was missing from the hip-hop landscape.