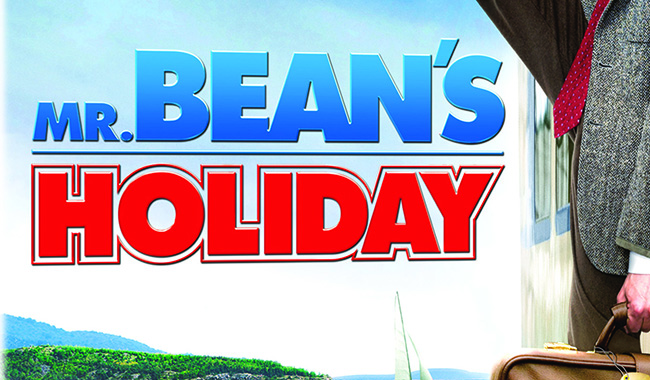 It is typical for film adaptations of successful TV comedy sitcoms that make it to the big screen to set the feature length film in a foreign holiday location and of course stretch something written for the small screen to feature length of some 90 minutes. Such classic British shows as ‘Dad’s Army’, ‘Are You Being Served’, ‘Porridge’, ‘Rising Damp’, ‘Man About the House’, ‘George and Mildred’, ‘The Inbetweeners’ and ‘Da Ali G Show’ to name a few made the big screen with varying results. Mr. Bean though enjoyed some success and on his first round as a TV sitcom starting in 1990 had advocates claiming that Atkinson was the new Chaplin with his new brand of silent slapstick humour. The TV show lasted for a few years, also spawning a film in 1997, Bean, in which Mr. Bean is a museum warder who is sent to LA to be humiliated as a curator handing over ‘Whistler’s Mother’ to an LA gallery but becoming an accidental hero along the way. The film had mixed results but was followed by an animated TV comedy in 2002.

The new re-release of Mr. Bean’s Holiday the DVD on Universal is a full package of a film that was released in 2007, 10 years after Bean came out. Despite showing initial promise the character of Mr. Bean is a very broad brushstroke slapstick comedy that proved to be more popular with a less sophisticated or younger audience. The 1997 film did little to dispel that idea that will hopefully be reassessed with any viewing of the 2007 film. What sets the newer film apart is its location. Not only does France offer some wonderful vistas and glamorous locations but also gives a good range as to why Bean is largely silent while also recalling the tradition of mime in French culture.

The plot, such as it is has Mr. Bean winning a lottery ticket while at a rainy English fete to Cannes in the South of France. Needless to say the trip is fraught with disaster and along the way he loses his tickets, money and unlikely friends. His adventure begins on the Eurostar and continues in Paris as he tries to get his connecting train from Gare de Lyon. There is one scene in the famous Le Train Bleu restaurant in which Bean mistakenly orders the Fruits de Mer platter consisting of oysters, crevettes and shrimps and disposes of some disgusting oysters into a lady’s handbag. The chef in the scene is played by one of the few cameos in the film, by Jean Rochefort, a famous comical French character actor. He slowly and painfully makes his way to the South of France, striking up a friendship with a boy who is left on the train by his father, all, of course the fault of Mr. Bean. Although he befriends the boy and tries to get him re-united with his father he is subsequently wanted for kidnapping and has further adventures with a film crew making a yoghurt advert set in German occupied France and meets a female actress whom he also befriends. Naturally this to ends in trouble and the director is played by Willem Dafoe.

The film is better than expected, even for those not fans of Mr. Bean and may work for those even cynical at watching Mr. Bean feature film for the reasons stated above. The DVD is brimming with extras including Making Of documentaries and a whole bunch of deleted scenes, including one on the Eurostar in which Bean spills coffee onto a sleeping business man’s laptop. This is the best and it is clear while the others don’t work and would slow the plot down. Don’t be put off, worth a viewing for a brainless 90 minutes.