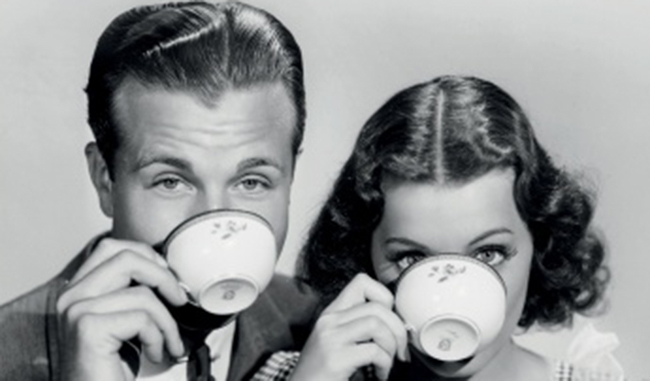 Since its Silent Era days, Hollywood has been teeming with said originators  – writers, directors, actors, designers, costumers, choreographers – getting up early and staying up late, fuelling themselves on caffeine cranked from industrial urns…

So states author and critic Steven Rea in his introduction to this 192 page retrospective, which comes close to being a quintessentially literal “coffee table book”. Containing more than 150 images of Hollywood greats (and Ronald Reagan), pouring, sharing, sipping and glugging; many of which are well composed but only a handful of which are interesting.

Holly Golightly on the intersection of 57th and Fifth, a candid shot of James Dean at his iconic best – collar up, cigarette in hand, commanding attention in a New York diner. Mary Philbin fretting over breakfast in a rare still from the lost 1927 classic Love Me and the World is Mine…there are some captivating shots. And it’s nice to see William Holden clutching something other than a glass of Johnnie Walker.

Rea adds commentary to every image, often providing useful information and context; but also maintaining a stream of eye-rolling quips. Ultimately there is nothing offensive or aggravating about Rea’s collection. In fact, there’s little of any substance at all. It’s difficult to see who this book was made for – there’s little brew-porn for caffeine-fanatics and most of the collection’s strongest stills are only a Google search away.

A decent photography collection surprises you; catching your eye and compelling you to keep turning pages. Unfortunately Hollywood Cafe is too easy to put down, and it does too little to justify its cover price. An idle curiosity at best.