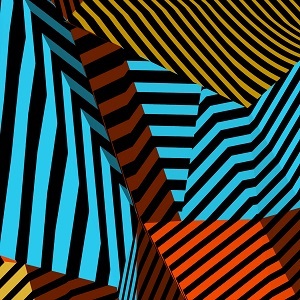 While we’ve made it through January but now seem living through February prepared to cower from the next potential mega-storm to batter British shores, there is light at the end of the tunnel… or at least a soundtrack to the journey through this meteorologically challenged tunnel that will help take your mind off broken fence panels, lost weather vanes and embarrassing battles in public with your umbrella.

This is a public service announcement, for your own safety and sanity, please bunker down in a secure holding and tune into the latest sunshine-blessed offering from Daniel Haaksman.

The Berlin based label-owner and DJ was brought to my attention with a high-tempo debut album helmed and released in 2011, previous to this Haaksman had been exporting some of the finest Baile Funk to the wider partying public, and it is reassuring to know that his musical flirtations with cultural diversity are still going strong, and that it is this passion for spreading ‘world-music’ to the world that forms the thematic backbone of this album.

It is possible to simply play this album from start to finish and only hear the music, to become lost in the rich musical textures that feel delightfully foreign to the common-or-garden Englishman, to feel compelled to move to the beats and the rhythms emanating from the stereo, but this is to only scratch the surface of the full ’African Fabrics’ experience.

More than just an album to brighten up dark days and lively up your party playlists, Daniel Haaksman borrows from and translates South African pop music, Ugandan rap, Columbian guitars, Angolan kudora and Zimbabwean marimba into electronically paired productions fit for European consumption, and this is the driving factor that brings together all these richly diverse sounds that straddle a continent, yet to uneducated ears simply sound ‘African’.

Five years ago the British-Nigerian artist Yinka Shonibare referenced the famous René Magritte painting “Ceçi n´est pas une pipe” when he declared that “A picture of a pipe isn´t necessarily a pipe, an image of “African Fabric” isn´t necessarily authentically African”, and it is with this mindset that Haaksman wove his own music.

Just as fabric or art that echoes a particular culture may have its manufacturing and distribution methods far removed from the geographical location that spawned it, so has the interconnection of the World Wide Web created a false approximation of what even enlightened souls would consider as authentically African music, homogenised and filtered as accessibility to diversity, Daniel Haaksman has created a new tapestry that pays homage to the originators, yet is self-aware in its own knowledge and strongly alludes to the fact that these new ‘African Fabrics’ carry a “Made In Berlin” label.