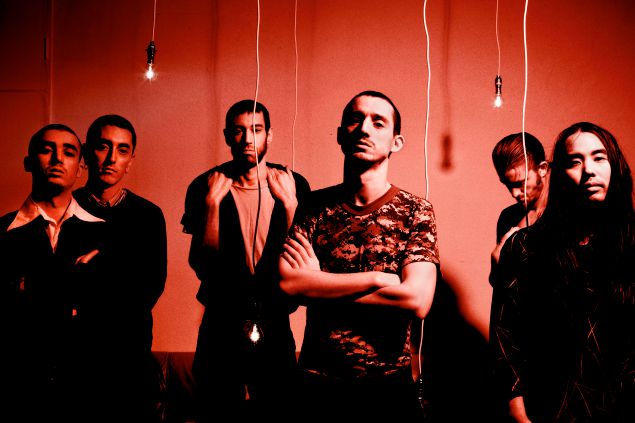 It was only three songs into Fat White Family‘s set before frontman Lias Saoudi got bollock naked and close to self flagellation. This act in itself may back up certain music critic accusations that he and his band of loveable degenerates are solely out to shock.

Fair enough, the Fat White Family know how to draw attention to themselves. But for me, and I’d say most of those who crowded tonight’s Glasgow’s Garage, our collective absorbance was down to the energy and general prowess the Fat White’s effortlessly ooze out, especially as a live band.

Prior to the sight of Saoudi’s swinging party piece, the band slinked on stage and almost literally launched themselves into the gig; first with the heroine infused nightmare ‘Tinfoil Deathstar’, then with a blistering and psychotic rendition of the brutally brash ‘Auto Neutron’. ‘Whitest Boy on the Beach’ and ‘Is it Raining in Your Mouth’ came and went in almost an instant before guitar player Saul Adamczewski was helping his band’s lead singer back into his pants.

Throughout the night Lias would cut around the stage looking like a cross between John Lydon and Mark E Smith; none more so the latter when launching into another one of the bands best tunes: the aptly named ‘I am Mark E Smith’ which inspired the most unlikely lyrical content for a sing-a-long; “Leave the kettle on/ you know it in your brain you must leave the kettle on.”

Midway through the gig the band were joined by Dale Barclay, former singer of the now defunct Amazing Snakeheads, who provided some extra howl (on vocals) and muscle (on guitar). Barclay added another layer onto the brilliant seedy and almost funky ‘Satisfied’, as well as the slow stomping Swans-esque ‘We Must Learn To Rise’. The latter in particular gave the venue the kind of atmosphere you might expect to find in a satanic cult meeting.

The tender and almost heartfelt (no, seriously) Hitler-narrated ballad ‘Goodbye Goebbels’ quietly brought the gig to the verge of closing on the most brilliant (if tasteless) of terms before the band struck up the final tune, ‘Bomb Disneyland’, which went one better in the dark yet comic imagery.

Only a band as perversely brilliant like Fat White Family could sign off on such a high note.

“Give the kids enough rope/ and let them hang themselves.”