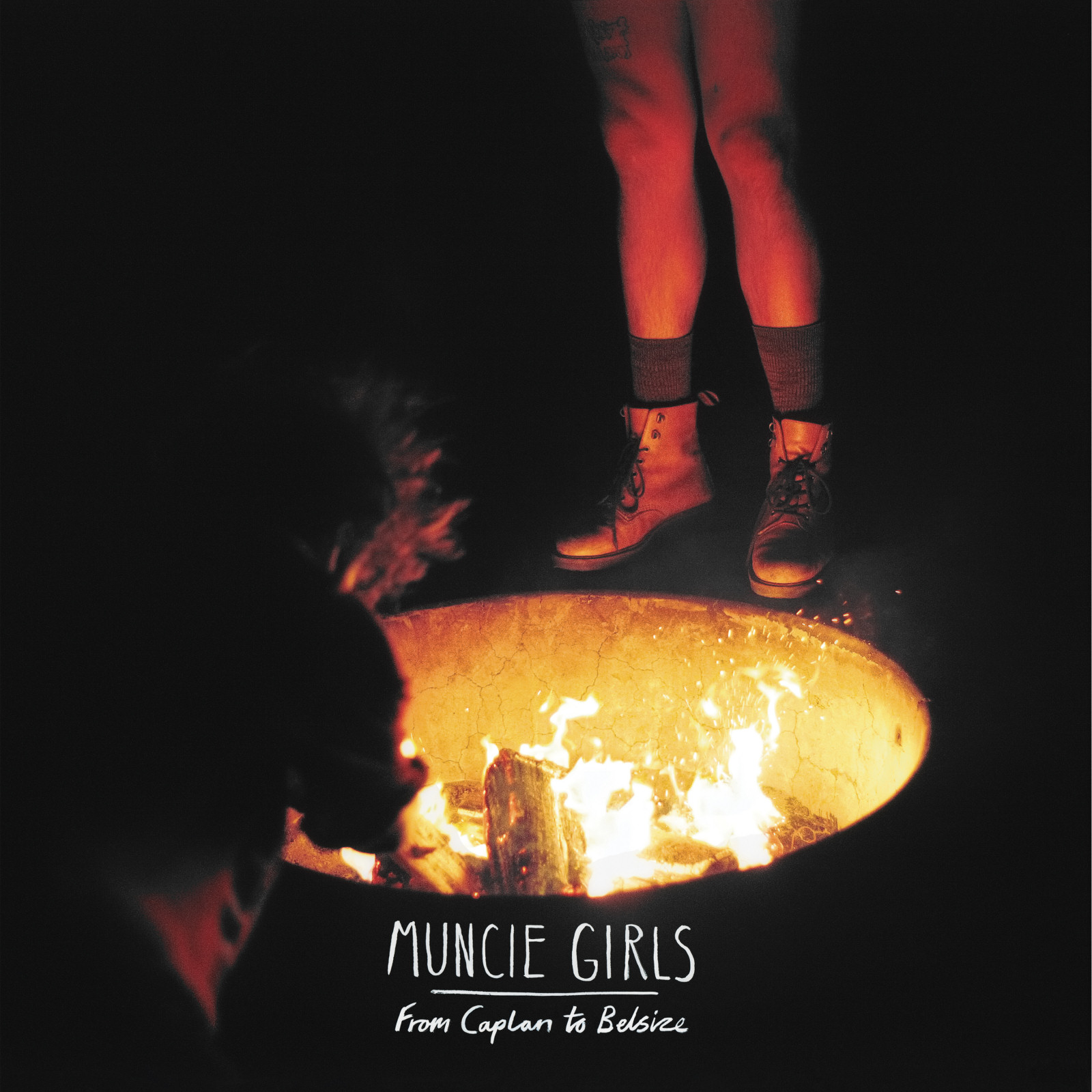 Muncie Girls – From Caplan To Belsize

Exeter’s Muncie Girls may have been circling the underground for a while, but that looks set to change with this certified banger of a debut long play. Their upbeat indie-punk sounds blended with cheerfully delivered tales of young adulthood, and the exciting chaos that comes with understanding the world and your place in it, makes for a hugely enjoyable set of tracks that get better with every listen.

Opener ‘Learn in School’ crashes straight in with the first of many insanely catchy riffs echoing the likes of Sharks and Apologies I Have None, and an irresistible vocal melody from bass-toting singer Lande Hekt. By the time ‘Gone With The Wind’ is through its sing-along ‘woah oh-oh-oh’ ending you already know that the trio – completed by drummer Luke Ellis and guitarist Dean McMullen – are a class act; very accomplished musicians, but always playing for the song too.

‘Respect’ may be the track that comes to define the record, purely for the well-crafted lyrics confronting the very real issue of sexism and boys-club mentality that exists throughout the rock scene. It delivers with it another brilliant chorus that I can’t wait to see and hear live too. “For the next few years you can laugh and joke about your next victim, but when you’re all grown up and your daughter cries will you be sorry you did this?” The beauty of these songs is in their simplicity, and they resist the temptation of over-thinking parts and sounds. The band have a great formula and they stick to it very well.

Recent single ‘Balloon’ is probably the go-to track in terms of getting to know Muncie Girls in one song. It offers a more laid back, grungy sound, but with a huge pop chorus, driving a tale of youth and self-searching – “I was on the other side trying to sort myself out, you were always getting high running away from your self-doubt” – and yet more examples of each member really being able to shine without overplaying or self-indulging. The songs are the stars of the show here.

‘Social Side’ grooves along like New Order listening to a Replacements record, and it’s got that annoying “where the FUCK do I recognise that riff from?” vibe to it, but you can’t put your finger on it. That’s the thing with these guys – each song has a pleasant surprise lurking around every corner, and Hekt’s breezy vocals, unburdened by layers of FX or over-layering make ‘From Caplan To Belsize’ a real treat right from the off. It’s also refreshing to see a band come along and really let the music, rather than the PR budget, do the talking.

Mid-point ‘Nervous’ maintains the more laid back grunge pop we’ve been getting used to by now, before single ‘Gas Mark 4’ perks things right back up with a modern punk anthem up there with the best of The Menzingers and co, whilst ‘Committee’ demonstrates the bands observational and leftist undertones again with another blast at societal discrimination – “I know you like to think that times have changed, we’re not represented in Parliament or pay, our voices are lost in a masquerade and now we have to fight to have our say.”

Closer ‘No Recording’ reminds us where these dudes are really from – the thriving DIY punk scene – and it combines the two main themes of Muncie Girls lyrical range; adolescence vs anxiety and the constant inner discussion we all have with ourselves about the world and what our role might be in it.

Sometimes less IS more, and the best thing about this record is that it is exactly the sum of its parts – three friends writing songs from the heart and shooting from the hip. ‘From Caplan to Belsize’ is a much needed and welcomed addition to the modern punk rock scene, and should be an album you already own.