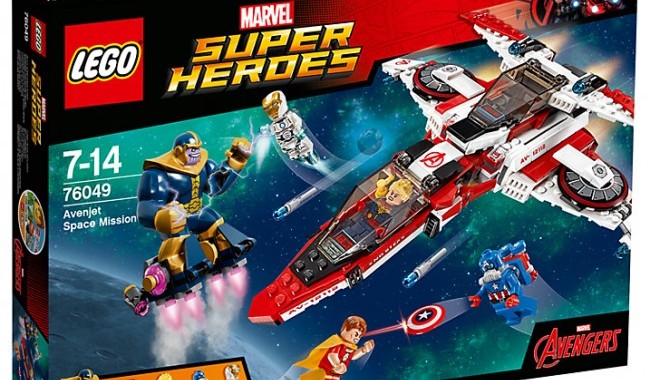 The Lego Superhero line-up is getting a lot of attention this year, with several excellent looking sets due to come out. Just on Marvel side, we have the Captain America: Civil War sets, some excellent looking new Spider Man sets and two new Avengers sets. The Avenjet Space Mission is clearly bridging a gap from the previous Avengers movies to the 2018 scheduled Avengers: Infinity War – Part I. The set introduces some new characters to the Lego Superhero line up without directly relating to any existing Marvel stories.

The minifigure line-up as usual is the real highlight and draw of the set with five unique figures of which three haven’t appeared in Lego at all before.

The first of the figures is the bigfig figure of Thanos. Thanos is due to be the villain of the Infinity Wars movies and has already appeared in both of the released Avengers movies in mid-credit cameos as well as a slightly larger role in 2014’s Guardians of Galaxy. The figure is well moulded to a standard bigfig pose wearing gold and blue armour which looks more like the plain comic version rather than the super detailed armour in the films. The face is nicely printed in purple with plenty of detail to make it recognisable. Outside of the face though, there is only a small gold printing on the chest. While in the movies we have seen Thanos sitting on his hovering throne, the standard pose means that instead of being seated, he gets Lego built ‘hover boots’ for this space adventure.

Next we get two familiar Avengers in form of Space Iron Man and Space Captain America. Iron Man gets a completely new looking space suit in white. It doesn’t really look much like any of the existing Iron Man suit designs with the closest probably being Mark 39 but only because it is also white. The printed detail is great though and really stands out on the white body much better than on any of the usual red suits. Captain America however, is much more standard affair. As far as I can tell, the only unique part is the helmet which appears to have a lens in front of the eyes and a metallic print on the back which presumably relates to the Lego oxygen mask part in front of his face. Cap also gets a jet pack in his usual red, white and blue colours with his customary stars printed onto the 1×1 disc pieces on the top.

The new member of Avengers introduced here is Captain Marvel, a female superhero depicting the current Carol Danvers version of Captain Marvel. The figure has her customary dark blue suit with gold star and red highlights with a messy blonde hair. Unusually, we also get two different head pieces for her, a normal female double sided face with a smiling and angry looking faces, but also a single sided masked version in red. This makes it the most versatile looking figure I can think of only leaving the problem of which look to display on your shelf!

Finally we get Hyperion who is a super-powered alien villain really taking the form of an evil Superman in the Marvel universe. Hyperion is in his usual look of a red and gold suit with short sleeves and golden boots. Again we get two different faces with a more human grinning face as well as an angry red eyed version on the back. Hyperion also has a new style golden cape with a wavy design that looks a lot more dynamic than the usual Lego cape.

The Avenjet itself is the follow on in the comic books to the Quinjets which have appeared in the Marvel films as well as in Lego form several times. The design actually reminds me a lot of the old Space theme Lego ships and while it is pretty faithful to the comic book look, it looks a lot more blocky than the Quinjet models have. The ship does however have some tricks on its sleeve. The Avenjet can be split into two separate crafts where the top part comes off and can fly off as its own mini jet.

The build starts off with building the simple mini jet, followed on by the large ship. The large ship uses all the modern technic and SNOT (studs not on top) techniques to come up with a good overall shape to the ship. The ship does get its fair share of stickers to add details and some Avengers branding but we also get two large printed disks for the wings to represent its VTOL capabilities reminiscent of the SHIELD Helicarriers. Overall the build is fairly quick and easy and shouldn’t pose any problems to anyone within the recommended age ranges.

The Avenjet itself is a pretty obscure subject for a set, but as ever, vehicles have never been a big focal point in Marvel Comics and it is certainly a better choice for a Lego set than many of the choices made where the vehicles don’t appear to have any connections to the figures included. The Avenjet also admittedly does suffer a little on the looks front. It just isn’t as cool looking ship as the Quinjet never mind the kind of ships you find in Star Wars sets, but it does do a good job of recreating the design from the comics. Having said that, it does have very good play features and it has been designed as steady as a rock which is surprising for this kind of dual ship design. Therefore, it will make an excellent play set that should be a welcome addition to any space battles with its colourful look.

While the model itself is unlikely to appeal for display purposes, as ever, Lego have again produced an excellent line up of minifigures that will greatly appeal to Lego collectors and fans of Avengers and Marvel comics in general. All of the figures aside from maybe Captain America will make must have additions to any Marvel figure collections. The set is also very reasonably priced for a licensed theme with 5 unique figures and over 500 pieces coming at under £50. Therefore, I have no doubt that this will be a very popular set and one which can be easily recommended.