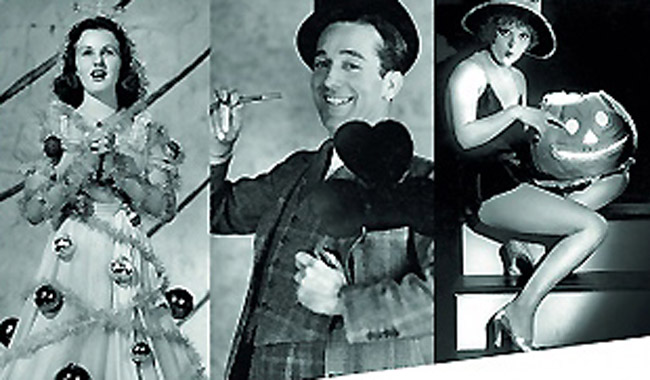 This is something of a quirky coffee table book. The authors’ passion for publicity photographs of old Hollywood stars from the studio system days began with collecting movie fanzines. Little is mentioned of these prolific and numerous magazines other than a few illustrated in the introduction with covers from issues of Modern Screen, Silver Screen and Photoplay with colour stills of stars posing for Valentine’s Day, Halloween and Christmas. Many of the images in the book come from the author’s own collection. On a recent documentary on the BBC about the history of Pinewood British screen goddess Joan Collins recounts how she spent hours posing in all sorts of ridiculous costumes for the lengthy photo sessions. The same was true and way more so in Hollywood.

Each page of the book is crammed with glossy black and white and colour photographs with more stars than in the heavens as the old MGM adage goes, each page celebrating holidays beginning with New Year through to Christmas and everything in between including St. Patrick’s Day and 4th July, each represented by a separate chapter. What is clear is how twisted, bizarre and surreal some of these images are such as the smiling but sadistic Thanksgiving images silent star Mary Philbin sharpening her blade in front of a giant turkey. Few of these pictures, no matter how beautifully composed or shot are anything short of disturbed and at the very least kitsch.

The book does give some indication as to how much focus the studios would go to focus on either developing a star’s image and personalising them and reaching out and extending the fan base – which largely explains why the book only goes up to 1970 when by then the star/studio system had all but died a death. Back in those, not wishing to pursue a cliché, less complicated, less cynical days unreachable stars could still send a message to their fans on Valentine’s Day and make it feel personal. Each still and image is accompanied by some brief text with an outline of roughly what year the picture was made, a brief biography and a couple of films associated with the star. What is particularly palpable is that the majority of the images are of female stars, very few of male performers and several of child stars (and even a still of Lassie). Stars vary from obscure but interesting looking silent sirens through to such familiar faces as Elizabeth Taylor, Doris Day, Debbie Reynolds and Marilyn Monroe. Few of these shots are iconic or of any standout merit other than amusing or to further sell an ideal. Rich in imagery but less in text this perfect coffee table is a nice soak to the brain.