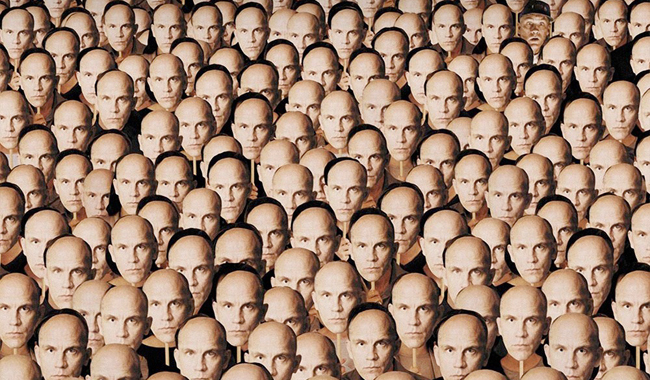 Although it’s common to see oddball indie movies appear from time to time, it’s far less regular for a giant studio to throw their weight behind one, however Being John Malkovich is a very good example of this phenomenon. Penned by Charlie Kaufman, this bizarre tale of a puppeteer besotted with a co-worker reportedly did the Hollywood rounds throughout the early 90s before landing in the lap of off-beat music video director Spike Jonze (via Francis Ford Coppola thanks to a nice dose of nepotism I hasten to add). A brilliant bit of casting completes the dream team and the result is a truly bizarre little comedy that can most accurately be described as, however unfortunately, a Rom-Com. But don’t let that put you off.

John Cusack takes the lead as Craig Schwatrz, a talented but jobless puppeteer, who upon discovering a portal that leads directly into the head of actor John Malkovich schemes to use it as a way to get into the knickers of his new found crush. His plan slightly backfires when said crush, Maxine (Catherine Keener), suggests monetising the discovery by renting out Malkovich’s brain like a fairground ride to a seemingly never-ending clientele of weirdos who revel at the prospect of experiencing life through the eyes of a famous actor; if only for 15 minutes a pop. Things get even more complicated when Craig’s Wife, Lottie (Cameron Diaz) becomes involved and Craig learns that he’s not the only one who’s in love with Maxine.

Both Diaz and Cusack are unrecognisable in their roles after the wardrobe department had finished with them. I’ve read Diaz’s physical appearance in this movie described as ‘homely’ – a polite word for unkempt, dishevelled or even ugly – and frankly it’s a testament to their skills with hair and makeup that they made Diaz embody that description perfectly. Whether their physical transformation aided their portrayal or not, both Cusack and Diaz present us with career defining performances. I’m not typically a fan of Cusack, but he shines here and manages to navigate the complexed juxtaposition of comical and tragic that the script requires. Schwartz’s character arc takes him through the gamut of hapless dork, manipulator and even to some degree villain, but the viewer is left ultimately feeling pity for the tragedy that ultimately becomes of him. It’s very compelling and powerful stuff which sounds rather silly for a comedy flick and yet it works so well. As for these comedy elements, this movie has it in spades. My highlights involve the titular character of John Malkovich and Schwartz’s early ‘test drive’ sessions using the portal. Moments such as a restaurant patron recognising Malkovich who thanks him for his performance ‘in that one film where he played a retard’ and the repeated insistence that he’d once played a jewel thief are priceless.

On to the disc itself; I’m not entirely sure what Universal are doing here except for seemingly re-releasing a host of classics from their back catalogue on DVD with a full RRP and no new special features. Highlights on this disc are basically the various fictional presentation moves as depicted in the movie but stand alone. So we see the 7 ½ floor orientation film and the full presentation of Schwartz/Malkovich’s magnum opus ‘American Arts & Culture Presents: John Horatio Malkovich, Dance of Despair and Disillusionment’, however these have be presented on previous DVD releases. A couple of TV spots and the original theatrical trailer complete the rather lacklustre package.

Being John Malkovich is a prime example of a modern classic that is as fascinating as it is touching in spite of the very well placed comedic elements. Even among a sea of quirky, pretentious indie films this one still stands out today as unique as it did upon its original release in 1999. If you’re a collector it’s hard to give the disc itself a recommendation because it seems like a rather pointless re-release, on a format that is quickly becoming antiquated and without any new content to justify it. If however the movie originally passed you by I’d highly recommend talking a look.