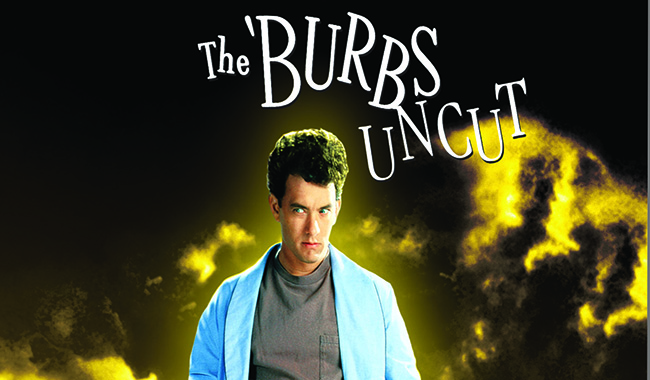 If you were to ask a group of, say, 30 – 50 year olds to name their most beloved director of the 80s you can wager that Joe Dante’s name would show up several times, and rightfully so; his directorial filmography reads like a playlist to my childhood. But in 1989, the man who’d given us Gremlins, Explorers and Innerspace directed The Burbs, which some might say was the beginning of the end of this prolific director’s best works. Lets’ dig in and find out!

Tom Hanks stars as Ray Peterson, a resident of an idyllic American neighbourhood cul-de-sac, who decides to spend his holiday at home, much to the disappointment of his wife, Carol (Carrie Fisher). Egged on by his eccentric neighbours, Art Weingartner (Rick Ducommun) and Lt. Mark Rumsfield (Bruce Dern) the group decide to spend the week investigating the mysterious Klopek family whom Art suspects are up to no good in the wee hours of the night.

Weingartner turns in a performance of the classic irritating, overweight ‘best buddy’ to Hanks’ straighter ‘Everyman’ character with his nosey obsession with the secretive Klopeks. I’m quite sure it’s supposed to be more amusing than the result we see onscreen, but the character dynamics on display here are classic Joe Dante fare that we’ve since seen imitated, often with greater success since. Ducommun’s Rumsfield saves the show somewhat with his ex-soldier paranoia contributing to some more entertaining moments and Corey Feldman’s presence as an amused teenager who watches the story’s events take place from his porch is a well-placed addition. Hanks is on form as usual in what is possibly his last light-hearted 80s-tastic role before he turned his attention to Oscar worthy drama, however The Burbs is unlikely to be remembers as lovingly as Splash and Big. The movie suffers from some pacing issues and tries rather unsuccessfully to maintain a mystery surrounding the Klopek family that is unfortunately handled very anticlimactically at the conclusion.

The Burbs can retrospectively be described as a kind of Desperate Housewives meets Family Guy meets The Addams Family, complete with the ‘sit-com’ air that those comparisons imply. Dante’s obsession with pandemonium in an American Dream setting is displayed in full force with a set up that he’s managed more successfully in the past – and since in Small Soldiers – but I still have a degree of nostalgia for the film, even if it is difficult to find originality here 25 years later.

The disc is another Universal re-release, on DVD only at present, and comes completely devoid of special features with the exception of a teaser trailer. The picture quality is also particularly poor so I wonder if any effort has been put into this woeful and baffling re-release at all.