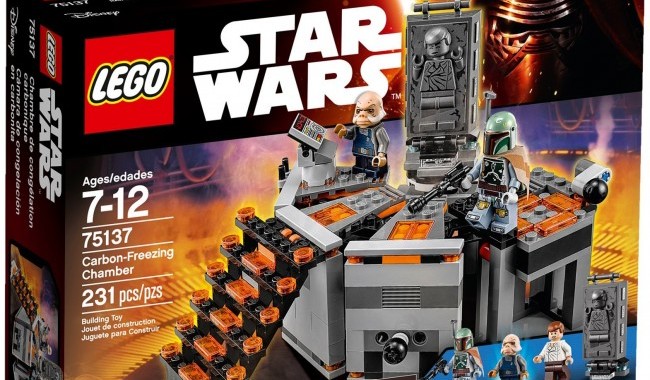 Considering the popularity of the Empire Strikes Back, it has been a continuing frustration for fans of Star Wars Lego that Cloud City, the culmination of the film has been consistently ignored by Lego in recent years. This has been made worse by the fact that the Battle of Hoth, the opening sequence, has been covered nearly to excess. If you don’t count the various versions of Slave I or the Star Wars mini planet set ‘Twin-Pod Cloud Car & Bespin’ (9678) in 2012, the last proper set based here was ‘Cloud City’(10123) released in 2003!

Let’s be fair though. While scenes like ‘The dinner with Vader’ or the final battle between Luke and Darth Vader are probably among the most memorable in the whole of Star Wars, they do not necessarily make for the greatest Lego sets. It really is all the Cloud City specific minifigures that the fans want and we can only hope that Lego will just somehow figure a way to get these released.

This rarity of the subject matter is clearly what has got the fans so upset about the Carbon-Freezing Chamber set after the initial excitement over it. A £19.99 set was never going to satisfy all the interest out there.

Speaking of memorable scenes, the Carbon-Freezing Chamber really was tailor-made to capture the “I love you/I know” moment, but for some reason Lego failed to include Princess Leia in the set. Lando Calrissian is another key figure to the Cloud City scenes, but one that has only ever appeared four times in Lego and two of them in the Jabba’s guard disguise. Instead, we get Boba Fett who to be fair is also a fairly rare figure, but has only recently been released as part of the UCS Slave I set (75060). While it’s great that this makes the new and updated Boba Fett available to everyone, having both him and Han Solo in carbonite (also in the same set) released so soon again does mean that there is very little new on offer here.

The Boba Fett offered here seems to be the exact same figure as in the Slave I except that it doesn’t have printed arm detail. This seems like a good compromise to keep the UCS Fett properly unique and therefore avoid angering the collectors even further. The current figure is definitely an upgrade in detail over the last available mainstream Boba Fett figure in the 2012 set ‘Desert Skiff’ (9496). It must be said though that the 2012 Fett was probably one of the best minifigures out at the time, so the improvement is more subtle than you might think.

The Han Solo figure again is the same as in the Slave I set, though with his already brown legs changed for a slightly darker shade. In fact, there’s been very little change in the ‘carbonite’ Han figure ever since the 2010 Slave I (8097) when the actual Han Solo in Carbonite piece was introduced as well. The carbonite piece is still the same but also still fantastic in every way and in no way in need of an upgrade.

So while carbonite Solo and Boba Fett are excellent figures that will draw in the mainstream audience, the only excitement for collectors is the first ever appearance of an Ugnaught. Ugnaughts are the short, porcine looking workers at Cloud City. The head mould is very detailed and gives what I feel is a good proxy Ugnaught. The odd thing about Ugnaughts in the film is that, aside from height, it is very hard to point to any generic features on them as the costumes seemed to be very variable going from almost a full pig face to very human looking creatures. The figure uses the usual short legs and is wearing the same as in the corresponding Carbon-freezer scene of blue dungaree trousers and a gray undershirt.

Build-wise, the Carbon Freezer Chamber is actually a bit of a surprise. The mechanic for swapping Han Solo to him being in carbonite, is almost over engineered. I found the mechanics and construction of the innards fascinating and certainly don’t remember anything quite like it outside actual Technic sets. The mechanism lets you manipulate the Han figure attached to the rear of the carbonite piece to go down and then appear the other way around so as for him to be inside the case. Yet, I can’t help to think that there must be an easier way to achieve this action and ultimately Han still falls backwards rather than going down as it does in the film.

This belies the other obvious disappointment with the look of the chamber, which is that it really only depicts less than half of the central area. The rear half of the circular area is just missing which leaves the completed set just looking incomplete. Although it would have seriously added to the piece count, I think most fans would have preferred the look of a complete circle to the mechanism. Also I can’t but help thinking that at £40 set price, we could have got a few more of those already mentioned missing minifigures.

On the positive side, the colours, particularly with lots of translucent orange pieces does strike as immediately recognisable look. The stairs also look very nice, though I can’t help but think that in the film the stairs came down to the carbon freezing area rather than up to it, but for the look this works very well.

There is also a small area underneath which presumably represents the holding cell that Han, Lando, Chewbacca and Leia were held. This includes a table for Han to lie on and on the other side a lift that leads them to the freezing platform.

All in all the Carbon Freezing Chamber is a bit of a mixed bag. There is no question that the set including the three minifigures at £19.99 is very good value indeed. Yet, the promise of a Cloud City based set did get everybody excited and therefore the final look and selection of figures does disappoint a little despite the obvious positives.

The build is very interesting for the mechanism part alone and overall the look is very nice despite the incomplete platform.  The minifigure selection with the carbonite piece included is superb for those who have not purchased the expensive Slave I set and that alone should ensure that this set will sell very well indeed to the more casual Lego Star Wars fans.

Ignoring the expectations then, this is a wonderful set with a great minifigure selection and an interesting build at a very low price point for a Lego Star Wars set in particular.

It remains to be seen if Lego will return to Cloud City any time soon. It is perfectly possible that they are looking to cover the main events there in similar smaller sets with few of the figures in each set. I don’t think anybody would complain if that were to be the case. Let’s just hope that it is, and we won’t have to wait for another decade for the next Cloud City based set.