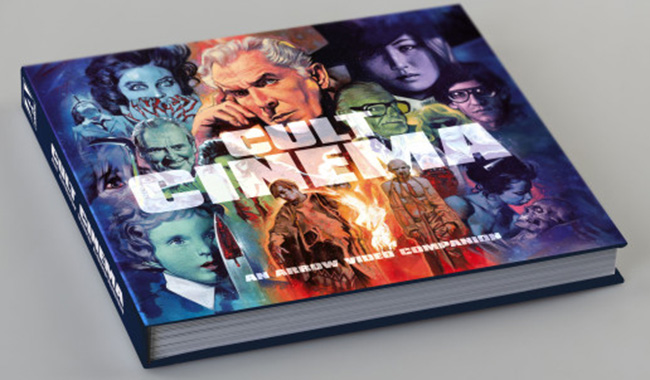 Wisely, Arrow are now headed into the book publishing realm with this 250 page opus acting as a companion to the series.

Cult cinema maker and lover Ben Wheatley provides the introduction (Or at least his introduction to Cult cinema) in the book which is then divided up into key areas: Cult Movies, Cult Directors, Cult Actors, Cult Genres (and Sub-Genres) and Cult Distribution.

Cult Movies has 7 chapters each focussing on a film and written by a guest writer. Arrow Video fans won’t be surprised to see Alan Jones taking on Dario Argento’s Deep Red (as he pretty much wrote the book on Argento). There may not be quantity when it comes to film coverage here; but there is a broad range of cult films from the horror of the aforementioned Deep Red to the comedy of Withnail and I and The Burbs, to the visceral likes of Battle Royale.  Naturally all of the films selected have been given the Arrow Treatment on disc.

Cult Directors has 6 picks: Cronnenberg, Craven. Romero, Kaufman, Brass and Suzuki. Should Arrow go for a second volume this leaves a vast selection of directors they have covered yet to talk about.

Cult Actors only focuses on 5 actors, but the range again expands beyond what you will have read about already from Vincent Price and Baris Karloff to Pam Grier.

Cult Genres hits the nail on the head by looking at some of the more obvious genres such as the Giallo and the Spaghetti Western, but culminates of more specific sub-genres such as Food Horror and Empty City Sci-Fi.

Cult Distribution looks at another angle  taking in the Video nasty, Super 8, Asian DVD and festivals.

It’s an interesting tomb that covers a lot of ground, each area could be expended upon in the world’s most elaborate spider-gram. And should the book take off, perhaps we’ll see more volumes yet to come.