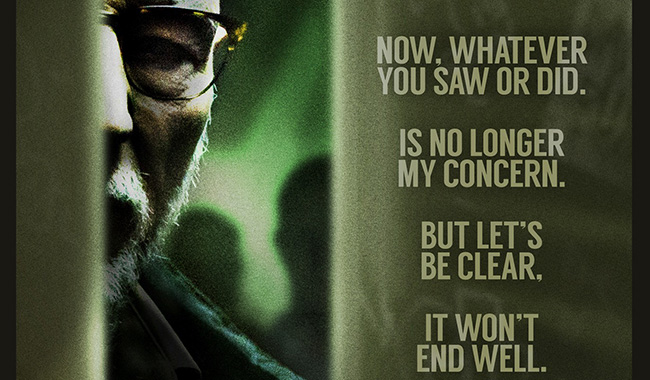 Director Jeremy Saulnier delivers another solid effort after the much acclaimed Blue Ruin a couple of years back. Green Room is another nail biting tension brewer that gives way to shocking and sudden visceral violence.

A small time punk band are falling on their luck and decide to take a detour to play a small gig off their planned grid. Sadly the place is run by a group of supremacists, and when a murder is witnessed; the band trap themselves in the back stage room with seemingly nowhere to go and an angry mob outside waiting for them.

Saulnier may start the film in slow fashion to give you a chance to get your bearings as an audience member and become familiar with the characters. But when the situation in the titular room happens it is sudden, and like any real life incident tension brews suddenly as the situation happens.

The camera flips between the two groups – both deciding how best to handle their current situation. When violence erupts it is bloody, visceral and shocking. And this is what you expect from such a film. It’s just such a surprise to actually get it form a film maker these days, and for it to be so effective.

More often than not studios or weak minded film-makers pull their punches, but Saulnier lets rip, and never does it feel as if he is trying to score cheap glory shots. He puts you in the moment with the characters which is where the audience needs to be for full effect.

For too long cinema goers are made promises from products that simply just don’t deliver. The reasons? Budget perhaps. Lack of talent. Certainly!  And that all too often need to succumb to playing to a younger audience and also just the full on fear of second guessing the audience.

It seems now we are entering an age where not only a bigger budget film can deliver on the promise but more importantly the talented, passionate and nerve fuelled independent film makers such as here – staying true to storytelling and to give us what we want

Green Room then is a much needed crack to the face to remind us just how powerful and terrifying a thing violence can be.