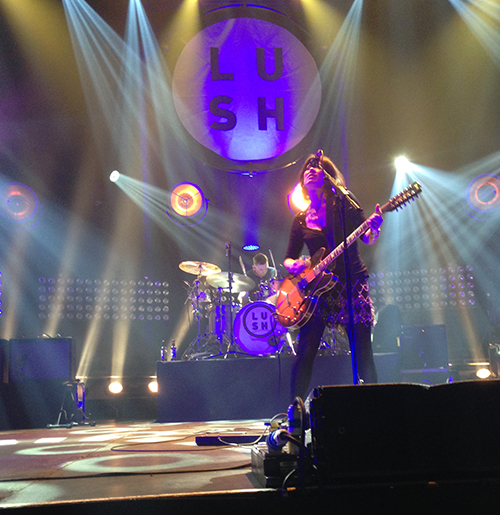 Support band tonight was Pixx, who have a strong vocalist up front doing various vocal exercises that will no doubt come in handy down the line. Right now as a band they perhaps need to find stronger (but not completely different) music to match it.

Lush though took to the stage and launched right into favourite De-Luxe. Suddenly the room is alive (and maybe secretly relieved that after a 20 year gap the band in such a strong condition). Leading vocalist Miki Berenyi has been away from music for such a long time, she’s clearly been singing in the shower ever one of those mornings as her performance was strong and her presence on stage commanding.

Any instrumental adjustments that needed to be made where done at the end of that song and then we were all off to the races!

The joy continued into tracks Breeze, Kiss Chase and Hypocrite and there didn’t seem to be anything to suggest that they are unsure about any of the choices they have made for the set-list tonight. Ok there was that comical moment when the drummer accidently started the wrong song, but that only endeared us to him all the more.

In their time, Lush produced 3 studio albums (Spooky, Split and Lovelife). Lovelife bizarrely only gets one track played. The singles from that album 500 (Shake Baby Shake) and Single Girl are nowhere to be seen nor the terrifically moody Last Night. Instead they opt for opening track (and as Miki called it out on the night as) the Brit-pop track Ladykillers.

Spooky got a few tracks played from it in the seco9nd half of the gig, all crowd pleasers (including final song of the evening Monochrome).

There was also a lot of the very early EP work on display here from the likes of Scar, Mad Love and their Sweetness and Light EPS. But their second album Split (rightfully in this reviewers opinion) got the lions share with seven tracks as we counted them played on the evening – mostly in the first half of the show.  So it is hard to complain about them missing tracks from this album as they already played half of it tonight! But you can believe that the album is that strong that you will hear saddened voices missing their own personal favourites from that masterpiece of 1994.

So much may have changed in 20 years (We got the internet in that time!) but a fondness for the music of Lush has not waned, and thankfully they have the skills to match the work today.

It was great to have a band 20 years ago that had two strong female guitarists and songwriters powering out memorable tunes lyrically as well as emotionally and loudly on their guitars. Sometimes even letting the guitar work do the talking for large portions of their song work (Which makes it a bit sad that they didn’t fit in the epic sounding Never-Never at the show – but they did put play Desire Lines in their first encore which is equally as epic) levelling with ease anything that The Cure or Ride (Leave Them All Behind being obvious example of comparison) could produce back then.

And there were no signs of fatigue. No signs of needing to rest. Miki’s vocals remained strong from start to end, and she was happy to get her grove on as well as she played rhythm. How powerful an artist she is is made more impressive by how long she has been out of the game.

If anything, Emma Anderson seemed to wake up more as the gig went on. Phil King looked focussed, and their guest drummer Justin Welch (from Elastica, and a close friend to the late lush drummer Chris Acland) just fit the bill. His focus and energy really spilled out beyond the seat he was sitting on.

As far as crowds go – this may have been the best behaved crowd seen at such a loud gig – and believe us that it was music that deserves to be played as loud as possible. Stood at the barrier, our small group of friends and fans were expecting to get squashed against the barrier at a sold out gig.  But it simply never happened.

Lush are back with a new EP as well, and there is also a fan-lead promotion in the f0orm of Thoughtforms which can be found online via social media – There is already a lovely booklet produced featuring interviews with everyone.

There is also news of a move to producing an album perhaps next year, which we can then hope will result in another tour. Tonight was about bringing themselves back in a time that is still more than relevant for them to be playing and producing music, and for the fans to say thank you for the work that has lasted in their prolonged absence.

We live now in a time where new bands are simply not cutting it. A generational gap has crossed over where music from 20 years ago is as popular in clubs as it was back then; if not more so.

There is also a trend across many genres of music for bands from eras gone to reform and play together successfully. Lush are the latest in that line and have been received with love and appreciation from a fanbase that have clearly missed them, but have kept listening regardless to what they have. Little has diminished.

And with the success of this – Shoegazers are also now perhaps slightly more hopeful that we may in time get the reformation of other bands.

Light From A Dead Star