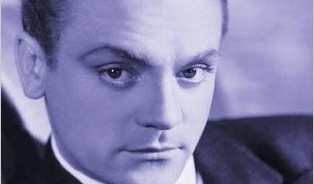 Throughout the 1930s James Cagney became the face of both the gangster film and Warner Brothers. Warner Brothers films had a particular gritty style with plenty of street slang and became best known for the social problem film during the decade, before and after the Hays Code era, the studio taking them into the front ranks of the major studios during the era of the Hollywood System. Warner’s made the first sound film, or ‘talkie’ as they were colloquially called, The Jazz Singer in 1927. From that came plenty of films with wise cracking Italian and Irish types creating, literally a new language in cinema. From 1929 and into the thirties the Depression bit into the lives of Americans following the Wall Street Crash with a particular public taste for gangster films. On a  Warner contract there were many Italian and Irish actors who built their careers playing tough immigrants from the streets. The first rank of these was James Cagney.

Born in 1899, James Cagney was brought up on the streets of New York and started his career as a vaudeville ‘hoofer’ or dancer, which was why one of his most personal films, Yankee Doodle Dandy (1942) where he played song and dance man George M. Cohan became one of his most personal films and best loved films. However, this film is outside the realm of this book which focuses on the actor’s growing career from his first film role in a small part in Sinner’s Holiday (1930) through to his last released film of the decade, The Roaring Twenties (1939) the last of many gangster films or related roles he played for some 10 years. This film was the culmination of a decade in which he made 32 films; all bar 2 were for Warner Brothers. But The Roaring Twenties was the last gangster film that Cagney made for 10 years. His fast, slick talking was ideal for these roles. Even when the Hays Code had kicked in by 1935 the studio was able to utilise the gangster from the anti-hero of The Public Enemy in 1931, the film that came to define him for many years to the G-Men in 1935 when he became a failed lawyer and enters the fledgling FBI, despite his former mob connections in the past and still managed to provide all the ingredients of a gangster film.

Sometimes in his films the support actors also had a big part to play. In his earlier films Joan Blondell was a sidekick and had an equally sassy mouth (although the Hays Production Code pretty much put an end to this). The chemistry between Cagney and Blondell was always spot on. In Footlight Parade (1933), his first musical, Blondell is the perfect sparring partner and even has the best lines, but here Cagney was able to for the first time show the diversity of his acting skills and skills as a dancer in a Busby Berkeley choreographed musical. Later he would act alongside such male actors as the equally Irish Pat O’Brien as well as some of the early key roles for Humphrey Bogart, the other tough guy gangster, although at this stage of Bogart’s career he was always outplayed by Cagney.

The films studied throughout this book also demonstrate the fight the actor had with the studio – it wasn’t a mutually respectful one. After The Public Enemy Cagney thought he deserved more money as an actor and throughout the decade he battled for himself and by default other actors for a better wage compared to the money the films made. On a couple of occasions throughout the 1930s Cagney walked out on the studio and refused to work risking the “you’ll never work in this town again” phrase being thrown at him and didn’t get any work for a year at a time. But Cagney was too big a bankable star and the studio gave in on each occasion. He even went to an indie Poverty Row company called Grand National Pictures where he made a couple of B movies between 1936-37 and made Great Guy and Something to Sing About, a musical. He also found he had greater artistic control at this studio but the expense of the latter film ended up busting the studio.

The format of the book follows along the lines of most of Neibaur’s other books in which he will take a classic Hollywood star and focus on a theme or an aspect/time of their career: ie. Clint Eastwood’s westerns or Harry Langdon’s silent comedies with a chapter dedicated to each film and a credits detailed list for each film. Each film is covered in detail tracing the films from a professional point of view although Neibau’s books are critical there seem to be many of the films listed for Cagney that are ‘among the best of the decade’. Never the less this is a good read and does effectively focus well on the career defining films of the decade.