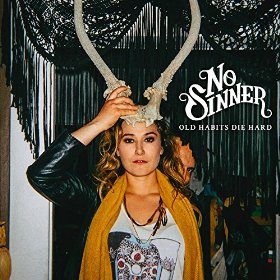 No Sinner was formed by the multi talented Colleen Rennison, a Vancouver based actress, songwriter and musician. In spite of her success in tv and film, Rennison always saw her future in music and 2014’s excellent debut album Boo Hoo Hoo made that seem a wise decsion. Now, two years on, Old Habits Die Hard should propel the hard rocking blues songstress and her band into the musical big leagues.

Colleen Rennison has always had the type of powerful vocal delivery that suits No Sinner’s bluesy brand of rock music perfectly. Combined with Eric Campbell’s dirty guitar riffs and Ian Browne’s thundrous drumming, the trio create a massive sound that echoes back to a classic blues/ rock era but also seems fresh and modern. Comparisons to Janis Joplin and her bands are frequently made, and for once there is some justification for the hype.

Old Habits Die Hard has twelve tracks and Rennison (look at the name backwards …) shows that she has not only the big blues voice but also good range and vocal control. This isn’t an album full of heartbreak, there is defiance and regret aplenty in the mix too. But when Colleen Rennison lets her voice soar the result is quite majestic and she produces something that few other rock singers could match.

The album opens with the upbeat All Woman, a wonderfully assertive song filled with energy and swagger. It’s down and dirty, the tone set by a confident, strong woman. Leadfoot is an early highglight, a driving song with a fast pace and some massive drum fills. Saturday Night is perhaps the fastest song on the album, and the shortest. It’s a real rip ’em up, foot to the floor, stomp. A good time slice of rock n roll that thrills.

The slower tracks on the album show real quality too. Tryin’ is laid back, but with a core of steel to its weary resignation. Hollow is quite superb, with passionate vocals over piano, while Lines On The Highway builds slowly into a performance of real quality. It’s not quite a ballad, more a burning slow blues delivered with passion and feeling.

The album closes in tremendous fashion too. The six minute long One More Time has it all: the big guitar riffs, the fast drum rolls and that voice. Imagine Janis fronting Led Zep and you won’t be far off. It rises and falls, the vocals drippping with reverb before letting rip in a crescendo of epic proportions. Closer Mandy Lyn is an older track, a slower blues song with a delicious groove, a sultry southern feel and yet more excellent vocals. This has all the makings of a great set closer and brings things to an end in real style.

Old Habits Die Hard is simply a fine album. The tempo is higher and the rock harder than the band’s debut, and it gives a sense of a group of musicians finding its sound together. There’s no filler here, just fifty minutes of excellent blues that showcases their talents . Whether its all out hard rocking or a softer and sultrier vibe, they nail it every time. The supporting cast play their part in fine fashion, but there is no doubting who the star of this show is. Colleen Rennison has a rare talent and the confidence to let everyone know just what she can do.