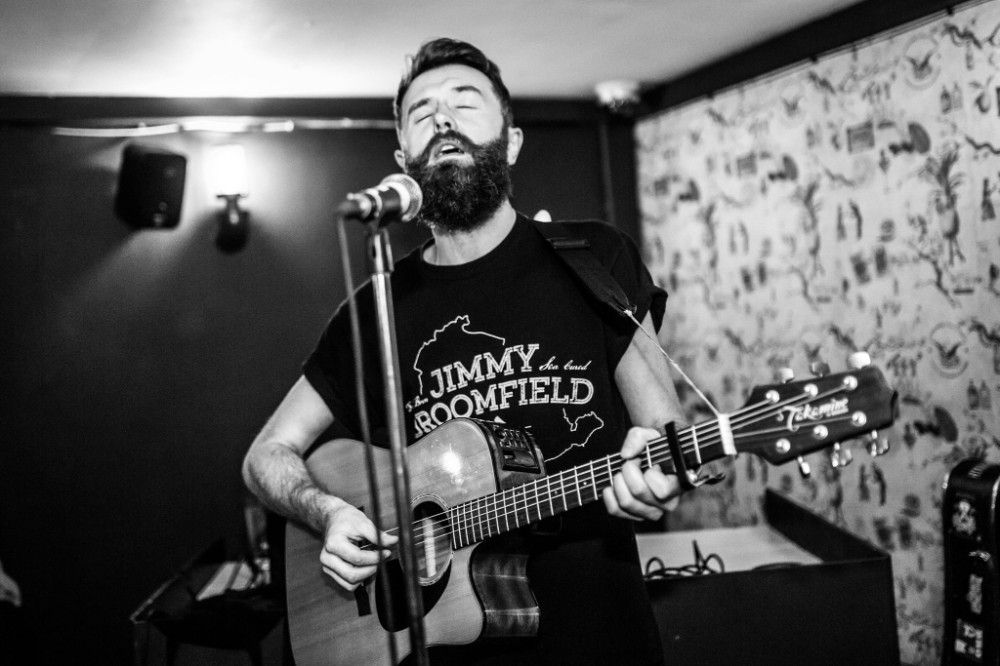 The Lion & The Wolf – Gullivers, Manchester

“I’m too young to be coughing up blood” sings Steve Millar aka Arms and Hearts. He is the sound engineer who has picked up his guitar and stepped in to plug a gap tonight. Well, he is promoting the event so he can do as he sees fit. Thankfully it’s not just an exercise in ego sating as he has his own song catalogue to relay.

Imagine Springsteen playing a solo set, passionate and with teeth gritted, giving a blast on the harmonica that’s wrapped around his neck whilst hitting the strings of his guitar with wild swings of the arm – that’s Millar. The pace and intensity drops to something similar to Billy Bragg telling a tale about Levi Stubbs tears, but this one is about male suicide, dispatched in a manner so quiet that a pin dropping could be heard. Or someone slurping a cocktail.

There are no cakes or renditions or telegrams from the Queen, but Chloe Hawes is still proud of achieving the landmark of her 100th gig. This one will be in front of the person who is producing her next EP and a bunch of supportive friends. Not so subtle titles as “Pour Gasoline On My Heart” are dispatched as she demonstrates her ability to knit delicate notes on the guitar with smart words.

Jimmy Broomfield pays homage to his ancestry by going under the guise of Heart of Oak which reflects on family members who would cut oak that would be made into boats by others who would sail them. As the lairy lads walk outside the venue reciting their drunken chants, Jimmy explains why it has taken 5 years to make a record; it’s because he’s shit at life.

One song was about breaking up with a partner but after that painful life experience he decided to take a more upbeat attitude to life and write a more positive song. The positive outcome was that two weeks later he met his current girlfriend. His next song about becoming a millionaire is being urgently worked on.

By this stage of the evening, the small, intimate surroundings are illuminated only by the few bulbs on the daisy chain hanging around the mic stand and the atmosphere is of a small, late night gathering at someone’s home where everyone has got to know each other to a certain degree. So when the last solo performer The Lion & The Wolf takes the ten or so strides from the back of room to the stage, it’s as if everyone is at least on nodding terms.

Thomas George, for he is TL&TW, is relaxed and in good humour. He comes across as a natural and engaging raconteur. After all, he has some good tales to tell and when they’re put to music it’s a winning combination. After all, who doesn’t dream about packing in their day job, then following what could be perceived as a dream but could turn into a nightmare? George has done this, still has a smile on his face and is working on a second album. Does he have any signs of regret about his decision? If he does, it’s well hidden behind his smile.